India on Sunday defeated Bangladesh by 30 runs in the third and final T20 International match at Vidarbha Cricket Association Stadium, Nagpur to win the series 2-1. Deepak Chahar was the pick of Indian bowlers, who picked up six wickets by conceding just seven runs. 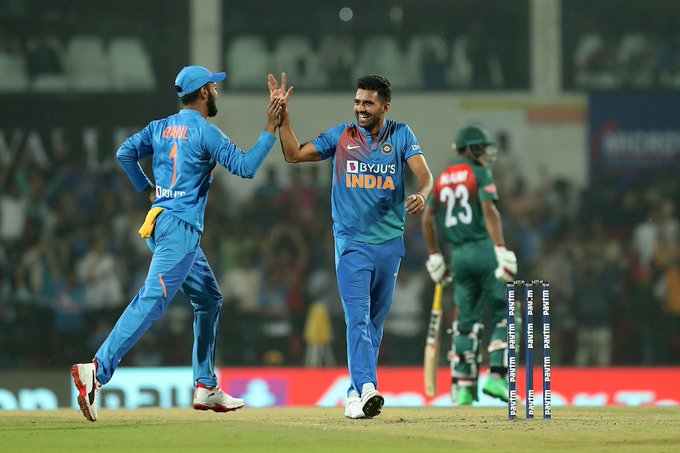 Put to bat first, India made 174/5 in 20 overs with Shreyas Iyer scoring an impressive fifty with his knock of 62 including five huge sixes and three boundaries off Afif Hossain’s bowling. This also included three sixes in just one over. KL Rahul was another Indian batsman to score fifty.

India’s performance was remarkable given that they lost captain Rohit Sharma very early on in their innings when the team’s score was just three.

Bangladesh’s start was electric but they lost steam as the Indian bowlers particularly Deepak Chahar and debutant Shivam Dube began to wreak havoc. His spell of 6-7 included a hat-trick in the last over. Deepak’s 6-7 is also the best ever bowling performance by any bowler in a T20 International match. He beat the previous record held by Ajantha Mendis of Sri Lanka, who had the spell of 6-8.

Shivam’s spell of 3-20 included the wicket of the Bangladeshi top-scorer Mohammad Naim, who made 81 off 48 balls including two sixes and 10 fours. At one point, Naim appeared to take the game away from India until he was deceived by Shivam.

Chahar picked up his first-ever five-wicket haul in a T20 International match. His hat-trick was also the first-ever by any Indian.