In a stunning attack against the BJP, the Congress on Wednesday accused the saffron party in Arunachal Pradesh of carrying out a ‘cash for votes’ scam alleging that Rs 1.80 crore in cash was recovered from Chief Minister Pema Khandu’s convoy. Releasing the videos of two cars carrying the huge quantity of black money in the midst of a high-octane election campaign, the Congress also asked the Election Commission to register a case against Prime Minister Narendra Modi as well as the chief minister and his deputy. 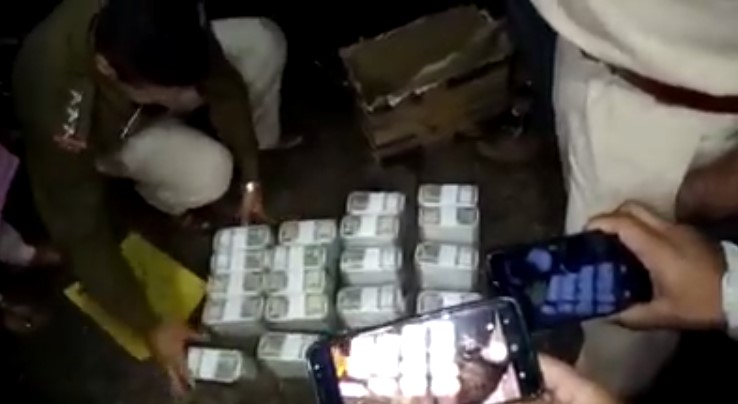 The money was allegedly recovered from the chief minister’s convoy in Pasighat around midnight, hours before Modi was to address a rally there on Wednesday morning.

Speaking to reporters, Congress’ chief spokesperson Randeep Singh Surjewala said that Khandu and his deputy Chowna Mein should be immediately sacked. He also said that Tapir Gao’s candidature must also be terminated. Gao is the saffron party’s Arunachal Pradesh president and has been from the Arunachal West Lok Sabha constituency.

Surjewala was quoted by news agency PTI, “Facing imminent defeat, a desperate BJP is resorting to ‘money power’ in the northeast.

Surjewala added, “There is a Hindi saying and let me say that again even in my remarks in English, ‘जब सैंया भए कोतवाल तो डर काहे का’. Prime Minister Shri Narendra Modi is trampling upon democratic norms in India. By running brazenly and blatantly ‘NaMo TV’, isn’t the Prime Minister mocking the constitution as also every democratic norm? By running ‘NaMo TV’ as an affront to the rule of law isn’t Prime Minister Narendra Modi and BJP, mocking the powers of superintendence and control of election of the Election Commission under Article 324 of the Constitution.

“Isn’t Prime Minister Modi and BJP drunk with arrogance of power and flushed with money, in trying to trample the majesty of democracy itself in India. I think it is a time for Election Commission to show its powers of superintendence and control to put a check and stop finally on this brazen, misuse of a media like the ‘NaMo TV’, so, that there is a level playing field in the election, not only the credibility of the Election Commission, but, the entire majesty of democratic process is at stake today.”

The Congress, however, did not commit itself on the authenticity of the two videos. It, however, said that the raids at the guest house had taken place only after Youth Congress workers lodged a formal complaint in Pasighat.

Surjewala added, “Why is the Election Commission sleeping and not taking action in the matter and not registered a case so far. Why is the case being hushed up?”