The Congress on Wednesday released what it called was the Rafale bomb. In the leaked audio, released by the Congress in a special press conference, a Goa cabinet minister, Vishwajit Rane is heard speaking to an unknown reporter. 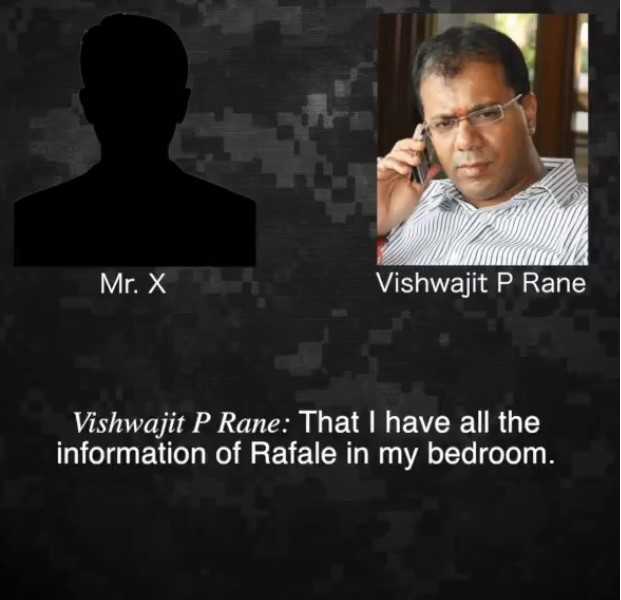 Rane, who had quit the Congress to join the BJP in 2017, is heard telling the reporter how Goa Chief Minister Manohar Parrikar flaunted in a cabinet meeting that he had kept all secret files related to the controversial Rafale deal in his bedroom.

If the content of the audio is true, this will explain why the BJP has been unable to remove Parrikar from his post despite his incredibly poor health. Parrikar has been undergoing treatment for pancreatic cancer since February last year. In the last few public engagements, he’s been seen arriving with feeding tube inserted in his nose.

Read the transcript of the conversation below.

X: Good evening sir
Vishwajit: Boss Good Evening. I called today.. there was a 3 hour Cabinet
Meeting.
X: Ok
Vishwajit: Just keep it confidential.
X: Han Han
Vishwajit: There were so many fights.. you know.. so many fights.. Nilesh
Cabral went on and recruited maximum engineers from his Constituency, so
everybody, Jayesh Salgaonkar got the list and showed it to him. Everybody
was fighting with him and everybody was upset because no work is being done
on recruitment front.
X: Okay
Vishwajit: Bapu Ajgaonkar was fighting with Sudin Dhavalikar because his
work was not being done.
X: Ok
Vishwajit: Apart from that the Chief Minister makes one interesting statement.
That I have all the information of Rafale in my bedroom.
X: (Shocked) What are you saying?
Vishwajit: I am telling you..
X: My God!
Vishwajit: Which you should actually make a story and actually you can
crosscheck with somebody whom you are close to within the Cabinet.
X: Okay
Vishwajit: Because this is how, you know.. this is something…which he said
..that means he is holding them to ransom..
X: I swear

Vishwajit: He said its in my bedroom .. here only in the flat..
Vishwajit: Each and every document of Rafale is with me.
Now whether he wanted somebody to go and inform them in Delhi..or what..
this didn’t know.. I didn’t understand…
X: My God
Vishwajit: Just.. I called you tell you this thing …
X: And 3 hours Cabinet Meeting like you know…literally heading nowhere, or
was there…some kind of a thing…
Vishwajit: Nothing …it was heading directionless… waste of time..
X: Sir tell me something… why is this man.. Suddenly… so interested in
having an Assembly Session.. that…our speaker.. ?
Vishwajit: Because he feels that the RSS will back him to become the Chief
Minister
X: Aah Acha Acha Acha. He is on his own train.
Vishwajit: He is on his own train. Somebody has said Sudin is very clear..
that he is not supporting. They have said that Vijay is very clear.. that he is
not supporting.
X: My God
Vishwajit: But we need to have a meeting… because you need to communicate
certain things to Delhi… what will be the outcome of this wholething..
X: Sir you tell…me na sir…whenever you tell me… I am there…
Vishwajit: I will tell you.. just brief and keep.. Because it will go in that
direction only.. I am very very clear
X: Okay…
Vishwajit: I will tell..
X: Sir so you let me know… whenever you want to come down… I will… be
there
Vishwajit: Okay Ok

Hear the leaked conversation with BJP MLA, @visrane, as he reveals Goa CM @manoharparrikar has hidden details of the #RafaleScam #RafaleAudioLeak pic.twitter.com/pIWnmFQp3q