Congress MLA from Rae Bareli, Aditi Singh, has once again chosen to defy her party by ignoring the call to boycott a special session on the 150th birth anniversary of Mahatma Gandhi. Singh, daughter of late Congress leader Akhilesh Singh, had courted controversy in August after she extended her support to the Narendra Modi government’s decision to abrogate Article 370 on Jammu and Kashmir. 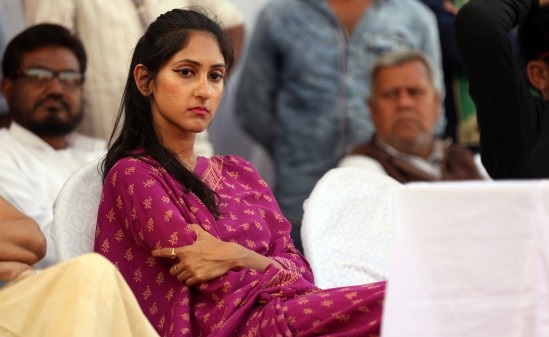 Singh attended the special assembly sessions organised by the state’s Yogi Adityanath government to commemorate the 150th birth anniversary of Mahatma Gandhi on 2 October. This despite the fact that her own party, the Congress, had called for the boycott of this special session.

A defiant Singh was quoted by News18 as saying, “Today is Gandhi Jayanti and I have been always talking about the development of my constituency, be it drinking water or issues related to electricity.”

Speaking to the media, she reminded all of how she defied her party on the issue of the abrogation of Article 370. Singh also almost dared the Congress leadership to act against her. “Just like I had spoken my mind on Article 370, I spoke today as I felt this was the right thing to do. People have voted me to power for development, I am ready to abide by whatever decision the party takes, but I did what I felt was right,” she told News18.

Singh chose to defy her party’s diktat even though Congress General Secretary Priyanka Gandhi was in Lucknow to lead a peace march.

Rae Bareli Lok Sabha seat has traditionally been a Congress bastion with Sonia Gandhi winning from here for many terms. Two of the five assembly constituencies are represented by Congress MLAs including Singh, while the other three have BJP and Samajwadi Party MLAs.

Local correspondents say that it’s only a matter of time before Singh joins the BJP. If she joins the BJP, it will be a big setback to the Congress. Former MLC Dinesh Singh had joined the BJP days before the Lok Sabha polls and even contested against Sonia Gandhi as the saffron party candidate. Sonia Gandhi won the seat but with a reduced margin.