In a series of leaked videos, Indian consul general to the United States, Sandeep Chakravorty, has been caught on camera spelling out plans to turn Kashmir into Palestine. In the videos, now being shared on Twitter, Chakravorty is seen addressing a group of audience promising to implement the ‘Israeli model’ in Kashmir. 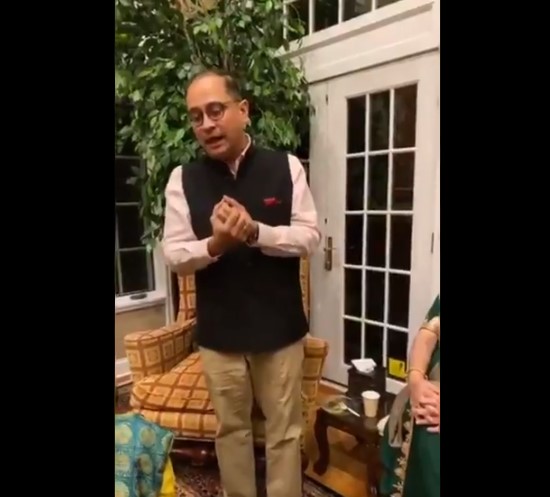 He says, “Somebody (in the audience) spoke about Jewish issue and the Israel issue… they kept the culture alive for 2,000 years outside their land and they went back. I think we have to keep the Kashmiri culture alive. The Kashmiri culture is the Indian culture, it is the Hindu culture. I feel Kashmiri as much as anybody else,” Chakravorty is seen saying evoking loud applause from the gathering.

“I think we made the strategic blunder that we thought that everybody is thinking like us. Everybody is not thinking like us. We should start thinking like others and I think that’s when we will be able to beat them in their game. I think that thinking is now coming. We have never used our strength as the majoritarian community.. We have never used our strength as the Hindu culture in the diplomacy. When we are using today, then people are having problems… You know we are now asserting ourselves. I believe, in my lifetime, we will have our land back and our people will go back. Our Kashmiri bhai-log are living in refugee camps… they must go back,” he added.

#India consul general in the US, Sandeep Chakravorty told Hindus & Indian nationals that India will build settlements modelled after Israel for the return of the Hindu population to Kashmir.

‘It has happened in the Middle East. If the Israeli people can do it, we can also do it’ pic.twitter.com/ztMjMti5oP

Reacting to the video, Pakistani Prime Minister Imran Khan tweeted, “Shows the fascist mindset of the Indian govt’s RSS ideology that has continued the siege of IOJK for over 100 days, subjecting Kashmiris to the worst violation of their human rights while the powerful countries remain silent bec of their trading interests.”

Shows the fascist mindset of the Indian govt’s RSS ideology that has continued the siege of IOJK for over 100 days, subjecting Kashmiris to the worst violation of their human rights while the powerful countries remain silent bec of their trading interests. https://t.co/ESZiaVp563

Kashmir has been put under a complete lockdown since 5 August when the Indian government announced the revocation of Article 370. Nearly eight million population in the valley has been without access to the internet with the top local political leadership placed under arrest.