The Bombay High Court last week quashed FIRs filed against the members of the Islamic organisation Tablighi Jamaat and made scathing observations against the government and the media for running a sustained campaign to malign Muslims. Days later, netizens took to Twitter to trend the hashtag #kejriwal_must_apologize for the role played by the AAP chief and Delhi Chief Minister Arvind Kejriwal in vilifying the Muslim community. 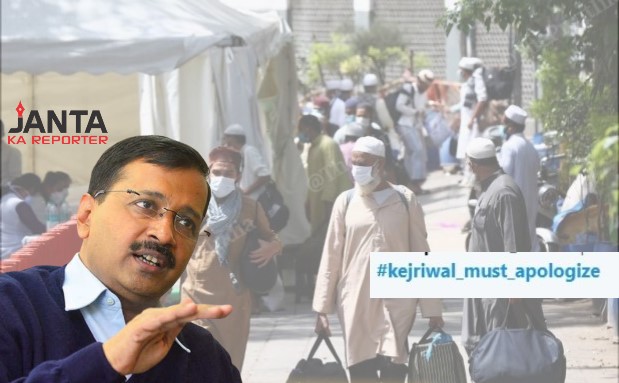 Furious Twitterati sought to highlight how Kejriwal had added a separate category of Delhi Nizamuddin Markaz as one of the key contributors in the spread of COVID-19 in Delhi. Others said that the Bombay High Court’s landmark judgment was also a serious indictment on Kejriwal’s ‘bigotry.’ Some also pointed out how Kejriwal had ordered the Delhi Police to file an FIR against Tablighi Jamaat members, while remaining a mute spectator against those whose hate speeches triggered the February pogrom, killing 53 people, mostly Muslims.

Bombay HC judgment on Tablighi Jamat is also about Kejriwal’s bigotry. He must apologize for mongering defamatory hatred towards Tablighi Jamat.#Kejriwal_Must_Apologizehttps://t.co/Jcx5GWRwNk

But AAP did not talk about any action against him.

But did not delay in talking about the FIR on Markez

Now after the decision of Bombay high court, the AAP govet Should also apologize. pic.twitter.com/5CfBxkgl5d

#kejriwal_must_apologize#hatemonger_kejriwal
So can we have official apologies from people who left no stone unturned to demonize Tablighi Jamaat ??#TablighiJamaat pic.twitter.com/YIGxj0qjT5

The Kejriwal gov has played the biggest role in defaming the Tablighi Jamaat and tarnishing its image. Therefore, Kejriwal must immediately apologize.
#kejriwal_must_apologize
#Hatemonger_Kejriwal pic.twitter.com/iRREZUJrrm

Bombay High Court’s judgment on Tablighi Jama’at is a tight slap to Kejriwal’s bigotry. And we demand an apology for mongering defamatory hatred towards Tablighi Jama’at.
Why was a seperate column kept for markaz patients? #hatemonger_kejriwal#kejriwal_must_apologize pic.twitter.com/FCMAPptk8A

Delivering the landmark judgment on Friday, the Aurangabad Bench of the Bombay High Court had said, “A political Government tries to find the scapegoat when there is pandemic or calamity and the circumstances show that there is probability that these foreigners were chosen to make them scapegoats.”

The court had added, “There was big propaganda in print media & electronic media against the foreigners who had come to Markaz Delhi & an attempt was made to create a picture that these foreigners were responsible for spreading COVID-19 virus in India.”