A video of Uttar Pradesh’s BJP Police indulging in an act of barbarism by savagely thrashing a group of Muslims inside a police station has gone viral. These Muslims were allegedly protesting against the objectionable remarks made by suspended BJP spokesperson Nupur Sharma against Prophet Muhammad 9PBUH). Sharing the video, an elected member of Prime Minister Narendra Modi’s party said that the torture of Muslims by a ‘return gift’ by the police. 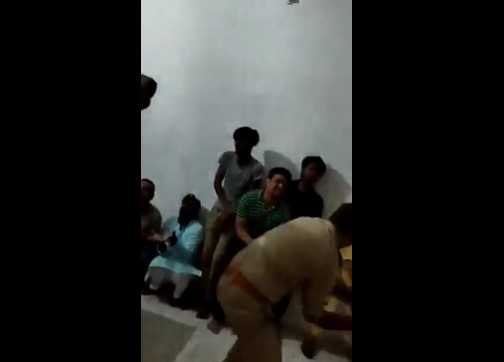 The viral video is believed to have been shot in Saharanpur, where peaceful protests were held by a group of Muslims after Friday prayers. The district’s top cop had rejected allegations of any violence when a pro-BJP media outlet, Zee Hindustan falsely claimed that communal clashes had erupted in Deoband, area renowned for an Islamic seminary in Saharanpur.

In the video, cops working under the BJP government were seen mercilessly thrashing Muslims even as they cried in pain.

BJP MLA Shalabhmani Tripathi, who previously worked as a media adviser to Chief Minister Yogi Adityanath, shared the video on Twitter as he gleefully praised the police’s barbarism by calling it a ‘return gift.’ Fearing another global action, Tripathi deleted the video. Tripathi had earlier worked as a journalist before joining the BJP.

Sir, with due respect, custodial violence is not something to rejoice about. Assaulting anyone detained in a police station is not some act of bravery. It’s a crime. Let’s not glorify an illegal practice.

Courts have the authority and duty to punish guilty, not Police. https://t.co/iIdO10658p

Reacting to the police brutality, top cop Arun Bothra chided a retired IPS officer, who too was seen praising the merciless beating of Muslims in custody. “Sir, with due respect, custodial violence is not something to rejoice about. Assaulting anyone detained in a police station is not some act of bravery. It’s a crime. Let’s not glorify an illegal practice,” Bothra wrote.