Bihar BSEB Class 10th Result 2019: The Bihar School Examination Board’s class 10, also known as Matric, results have been declared on its official website bsebinteredu.in. The pass percentage this has reached a record a record 80.73 percent.

According to reports, top four positions have gone to girls from Simultala Awasiya Vidyalaya of Jamui, a flagship school of the state government. 16 out of 22 state toppers are from this school. A report by Indian Express said that the first topper Prerna Raj scored 457 (91.4 per cent), followed by Pragya and Shikha Kumari getting 90.8 per cent. The third topper Annu Priya Kumari got 90.4 per cent. A student each from Banka, Bhojpur, Darbhanga and Patna schools are among top 20 students.

The statement (read below) in Hindi said, “The BSEB Class 10th results will be declared on 6 April 2019 at 12.30 pm in the presence of Additional Chief Secretary RK Mhajan and BSEB Chairman Anand Kishor.”

Officials from the BSEB are expected to address the media shortly. 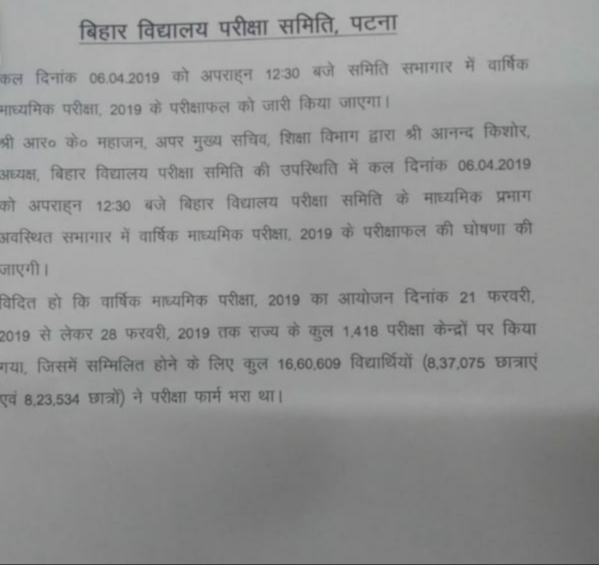 This year’s Matric results will be declared at 12.30 pm today at the board’s official website bsebinteredu.in. On 30 March the BSEB had announced the results for Class 12. The announcement had led to the official website crashing for several hours.

Janta Ka Reporter had exclusively reported earlier this week that the Class 10th BSEB results may be declared early this year, possibly in the first week of April.

Last year, the BSEB results for Class 10 were declared in May. The board has won plaudits for declaring its Class 12 results in a record time this year.

1: Go to the Bihar board official website: bsebinteredu.in or biharboardonline.bihar.gov.in