The brutal murder of a 2 1/2-year-old child in Aligarh has shaken the collective conscience of Indians and people around the world. The little girl was kidnapped on 31 May and her dead body found two days later. No sooner did the news of her kidnapping and murder emerge, supporters of Hindutva ideology moved in with lightning speed to make astonishing claims in a bid to give the little girl’s gruesome murder a religious hue. 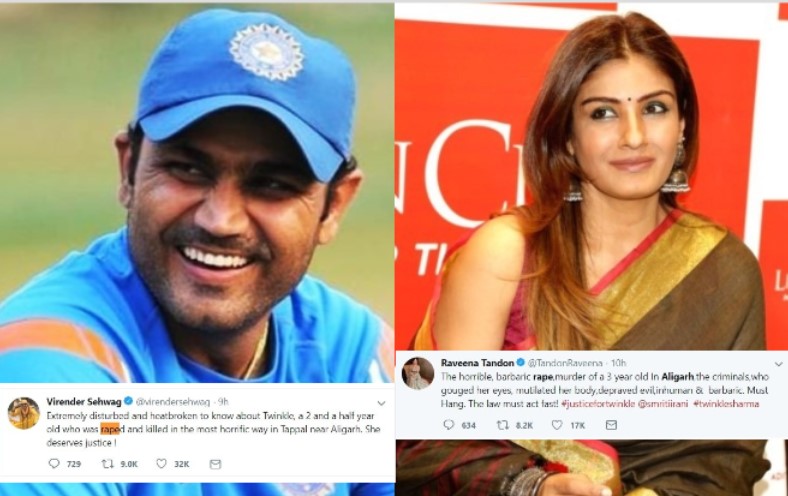 Former India cricketer Virender Sehwag, who is currently on a cricket World Cup assignment from England, too tweeted to his 19.2 million followers claiming that the little girl had been raped. He wrote, “Extremely disturbed and heatbroken to know about Twinkle, a 2 and a half year old who was raped and killed in the most horrific way in Tappal near Aligarh. She deserves justice!”

Actress Raveena Tandon wrote making similar claims, “The horrible, barbaric rape,murder of a 3 year old In Aligarh,the criminals,who gouged her eyes, mutilated her body,depraved evil,inhuman & barbaric. Must Hang. The law must act fast!” She has close to 2 million followers on Twitter.

Indian women cricketer Mithali Raj too tweeted expressing her disgust claiming that the girl had been raped. She wrote to her close to 7 lakh followers, “Shocked beyond belief about the rape of a 3 year old baby in Aligarh. It’s time this horrific crime is met with the severest punishment and without delay. This couldn’t be more heinous & we mustn’t tolerate it! @MinistryWCD urge you to direct the country in the right direction.”

Similar claims were made by the usual suspects of the pro-Hindutva social media army. They taunted known ‘liberals’ on Twitter asking them to express their outrage in the same way that they had done during the gang-rape and murder of an 8-year-old girl inside a Hindu temple in Kathua in Jammu.

The Aligarh Police, however on Thursday proactively issued a clarification stating that the post mortem report did not confirm rape. SSP Aligarh Police released a video message reiterating that clarification since the fake claims on rape had spread like jungle fire on social media platforms; thanks to the false information spread by several celebrities. displayed above.

The Aligarh Police said that the two accused Zahid and Aslam had kidnapped and killed the little child ‘due to an altercation over money between them and the father.’ SSP Aligarh Akash Kulhary said that the NSA had been imposed against the two and the cops will press for a fast-track trial so that the little girl’s killers are sent to the gallows as soon as possible.

While one hopes that the little childs perpetrators are meted out the strictest punishment for their heinous crime, the murder has once again exposed the fake news factory of the Hindutva brigade.

Janta Ka Reporter has always maintained that this platform will always take a stand on crimes against women and children regardless of their faith or political affiliations. We applaud the Aligarh Police for the speed with which they’ve arrested the alleged killers and come out with the facts on the gruesome murder of this little angel. We hope that the baby’s killers are sent to the gallows at the earliest without any consideration.