Unaffected by Arnab Goswami’s continuous rant, Salman Khan has once again taken a dig at the Republic TV founder by mocking his routine yelling inside the TV studio. During his conversation with Bigg Boss contestants, Salman also appeared to make fun of Goswami’s famous line ‘Nation Wants To Know.’ 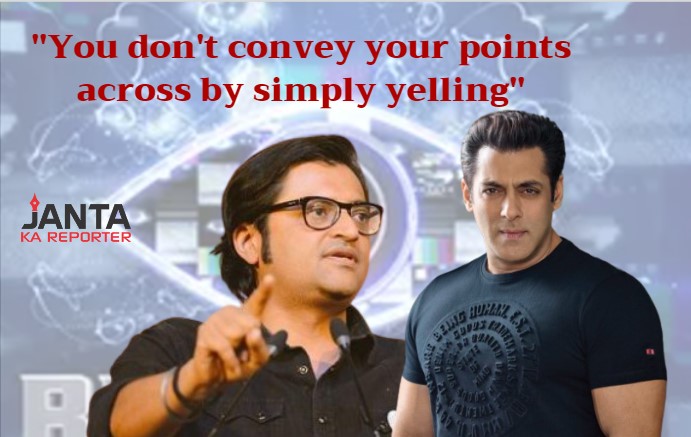 “Your competition is with others and not me,” Salman told contestant Rubina Dilaik. To which she said, “You scold me.”

Salman replied seemingly taking a dig at Arnab Goswami as he said, “The level at which you can raise your voice, I will bring my level lower than that. I tend to discuss specific points…Because I believe that you don’t convey your points across by simply yelling. It doesn’t happen at all.”

Goswami has been raising his voice demanding Salman Khan to break his silence on the death of Sushant Singh Rajput, who the latter believes was murdered. In his infamous broadcast, Goswami had yelled at Salman by asking, “Where’s that Salman, who used to talk so much? Where is he hiding? Why does he not raise a single voice against the drugs mafia? … I am asking this question by naming Salman Khan. Where are you, Salman Khan? Not a single statement or tweet. Why are you silent on the entire episode of Disha Salian? Why are you silent on the murder of Sushant (Singh Rajput)? Which city are you in Salman? Which country are you in Salman? You are a person, who speaks against the pulse of the nation. You will read the dialogues of Bigg Boss when they are written for you by others.”

Salman also made an indirect dig at Goswami by mocking the Republic TV founder’s famous catchphrase ‘nation wants to know.’ He told the Bigg Boss contestant Jaan Kumar Sanu, “I don’t want to say ‘this wants to know, that wants to know.’ What’s your relationship with Nikki Tamboli?”

This had evoked an instant reaction from Goswami, who had called the Bollywood star ‘coward’ and a ‘senior citizen.’