Much to the discomfort of Arnab Goswami, a Kashmiri guest on Monday night called BJP spokesperson ‘Mrs. Kuldeep Sengar’ and accused Gaurav Arya of performing mujra for Prime Minister Narendra Modi every night. This prompted Goswami to abruptly end the debate. 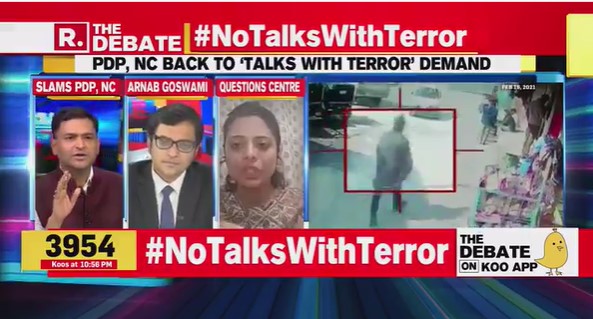 The ‘Mrs’ Kuldeep Singh’ jibe was in relation to the latter, a BJP lawmaker in Uttar Pradesh, being accused of rape and murder. Ifra Jan continued, “You have a sanskar of a bloody rapist in your party…I’m sorry but the BJP should be ashamed of somebody like you.”

Addressing the BJP spokesperson, Jan said, “Mrs. Kuldeep Sengar, we’ve had enough of you. Go and lynch some people because you can’t do anything else. You can’t bring employment and improve health infrastructure.”

Turning her attention to pro-BJP panelist, Sushil Pandit, she said, “You built your career on Kashmiri Pandits’ pain. What did you do for them?” Pandit was left scurrying for a suitable reply as Jan continued.

Goswami too found the going tough in the face of Jan’s relentless attack. The Republic TV founder said, “Ifra, you lost your composure today at a certain point. But, I will still tell you. There is so much negative feedback coming about your comments today.”

She told Goswami, “You guys should be ashamed.” A visibly nervous Goswami replied, “Don’t do this ‘you guys’ argument on me. I am just making a point.”

Goswami immediately intervened to announce that he was concluding the debate as he thanked his panelists.