A video of a man smoking onboard a Spicejejet flight has once again gone viral evoking angry reactions from social media users. The man in the video has been identified as Bobby Kataria and the video is said to be dated back to January this year. 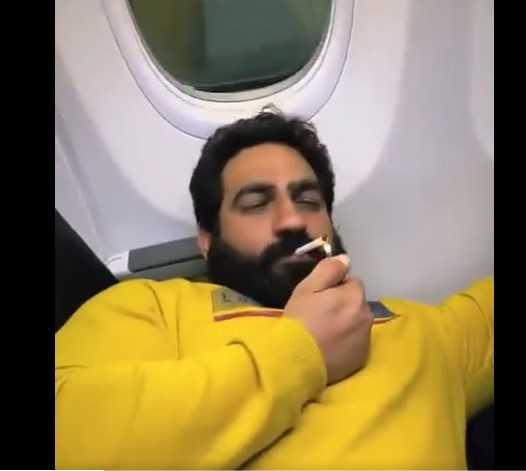 In the video, Kataria could be seen occupying all three seats at the rear side of the plane while lighting a cigarette using his lighter as the music plays in the background. Smoking and carrying lighter or matchbox inside a plane is prohibited in India. This has caused the outrage amongst netizens, who raised questions on the failure of airport security officials to confiscate these items from Kataria.

Some also wondered how Kataria’s action went unchecked by the airline authorities or Spicejet crew members.

Who Is Bobby Kataria?

Bobby Kataria is a social media celebrity in India, who enjoys considerably large followers on Instagram and Facebook. He’s often seen flaunting his lavish and outrageous lifestyles from his social media accounts. His actions have often landed him trouble and even police cases have been filed against him on several occasions.

According to ANI, one Spicejet spokesperson said, “This is with reference to a video on social media of a pax smoking onboard a SpiceJet aircraft. The matter had been investigated thoroughly in Jan 2022 when video was brought to our notice & a complaint had been filed by the airline with Udyog Vihar PS in Gurugram.”

The viral video, according to Spicejet, was shot on 20 January 2022 while passengers were boarding flight scheduled to operate from Dubai to Delhi. TKataria and his co-passengers shot the video on the 21st row when the cabin crew were occupied with completing the onboarding procedure.

Shockingly, Spicejet said that none of the passengers or crew was aware of the act. The matter came to the airline’s notice on 24 January, 2022 through social media posts, Spicejet told ANI.

Kataria was found guilty after an internal investigation by the airline and placed on no-fly list for 15 days as his punishment.

It’s not clear if Kataria is married or he’s dating anyone. There’s not much information available about wealth.