The much-awaited documentary of Prime Minister with wildlife survivalist Bear Grylls went on air on Discovery channel last night. Such was the focus on this documentary that hashtag #ManVsWild became the topmost trend on Twitter within minutes of the programme going on air. What also became a topic of interest for many was what PM Modi had to say on the show. 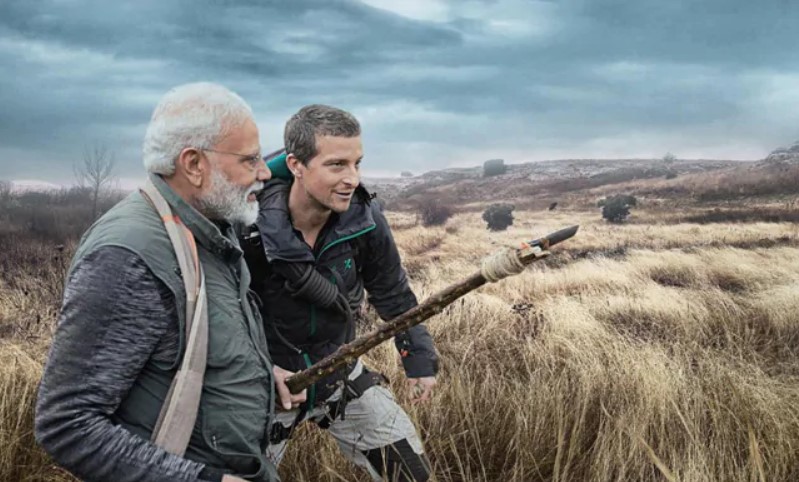 At one point, Grylls prepared a makeshift spear and handed over to PM Modi advising him to use the weapon to kill a tiger in the event of an attack from the wild animal. PM Modi replied while holding the weapon, “My values have not taught to kill anyone!”

As the programme continued showing PM Modi brave the rain and cold in the jungles of Jim Corbett National Park, Uttarakhand, he also narrated a childhood story of how he had grabbed hold of a baby crocodile from a pond and brought it home. “I went to the pond, grabbed hold of baby crocodile and brought it home. My mother asked me to leave it in the pond,” he told Bear Grylls.

When asked how he was feeling the experience of being out and about in the jungles, PM Modi said, “If you call this a vacation, then this is the first vacation I’m taking in 18 years.”

The day PM Modi shot this documentary, a suicide bomber had attacked a convoy of the CRPF, killing 45 soldiers. PM Modi had come under heavy attack from his political rivals who accused him of insensitivity for continuing to shoot for the documentary even when a national tragedy had struck India. Congress leader Rahul Gandhi had called him the ‘Prime Time Minister’ of India.

The prime minister and his party have consistently denied the opposition charge of ignoring the national crisis in favour of the documentary shoot.