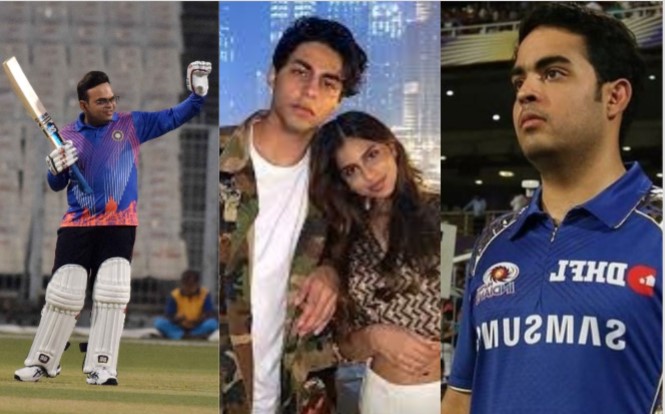 However, a Hindutva troll picked on Aryan and Suhana to accuse them of being the products of nepotism arguing that they did not deserve to be at the bidding table. The troll’s tweet, ridden with grammatical errors, read, “Two child who haven’t achieved anything in their life yet but bidding for many achievers who came from humble background. CANT BE JUSTIFIED!”

Given the attack that Shah Rukh and his children have been facing from India’s Hindutva brigade for Bollywood superstar’s Muslim faith, it didn’t take long before the troll’s tweet went viral.

But, little did the troll realise that his hatred for Shah Rukh’s children will drag Akash Ambani and Jay Shah into the controversy. Shah, the son of Home Minister Amit Shah, and Akash, the son of India’s richest businessman Mukesh Ambani, began to face grief from netizens who asked what made them worthy of occupying prominent positions within the IPL ecosystem in India.

Here is how netizens reacted:

Bhakts have problem with Aryan Khan present in IPL Auction but not with Akash Ambani neither Jay shah in BCCI.

Juhi chawla’s daughter was sitting at the same table i wonder why you cropped her out?? Akash Ambani was also sitting in that very room?? and so was Jay Shah chairman of bcci ??? what has these individuals achieved on their own?? pic.twitter.com/w0sfPneD6N

Ironically, the Hindutva troll, who decided to attack Shah Rukh Khan’s children, says he’s a die-hard supporter of Mumbai Indians, whose owner Nita Ambani was present with her son Akash Ambani to bid for players.

Mumbai Indians also bought Sachin Tendulkar’s son Arjun Tendulkar for Rs. 30 lakh even though the latter is yet to prove his cricketing credentials to be considered for an IPL team.