Vinícius Júnior crushed Liverpool’s dream of a treble as Real Madrid defeated the English side 1-0 in a nail-biting finish of a Champions League Final in Paris. Liverpool dominated the match with 56% possession and had 24 attempts at the goal, but it took one clinical finish by Vinícius Júnior to seal the match in favour of the Spanish giants. With tonight’s win, Real have now the coveted European title on 14 occasions. 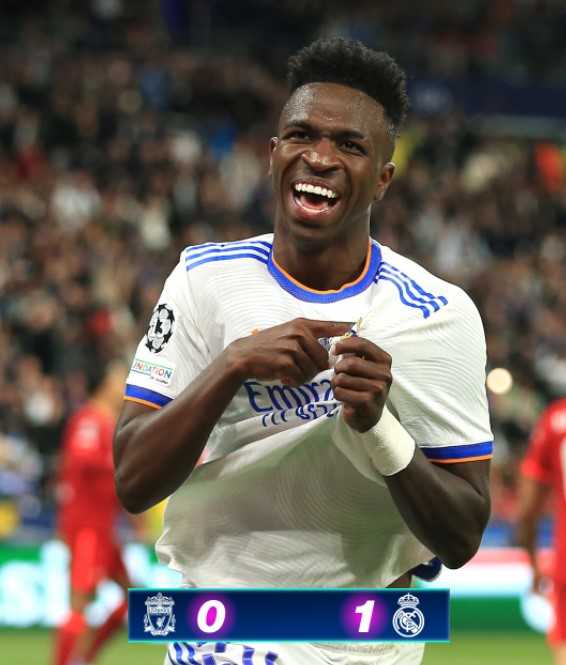 Although Viní Júnior scored the winning goal, it was Real’s goalkeeper Thibaut Courtois, who was exceptional with his saves, thwarting around two dozen of Liverpool attempts. Ex[erts agreed that Courtois deserved to be the Man Of The Match in tonight’s game. Real coach Carlo Ancelotti said after the match that he simply could not believe his goalkeeper’s performance.

Ancelloti told BT Sport after the match, “I can’t believe it. We had a fantastic season. We did really well. It was a difficult game and we suffered a lot, more so in the first half. In the end I think we deserved to win this competition.”

He said, “I am a record man. I had luck to come here last year and have a fantastic season. A fantastic club, a really good squad with a lot of quality and mental character.

“The season was top.

“I think we passed through really difficult games. The supporters helped us a lot in the last game. They helped us tonight. We’re happy and they’re happy.”

UCL WINNING GOAL FROM THE BEST PLAYER IN THE WORLD pic.twitter.com/pdsZ50eRTr

Courtois, for his part, told BT Sport, “Yesterday in the press conference I said that when Madrid plays finals they win. I was on the good side of history.

“I saw a lot of tweets coming my way that I would get humbled today it was the other way round.

“Today I needed to win a final for my career, for all the hard work to put respect on my name as I don’t think I get enough respect, especially in England. I saw a lot of criticism even after a great season.”