Saif Ali Khan had travelled to Manchester to watch the much-awaited India-Pakistan encounter of the World Cup. Now a video of a Pakistani fan hurling insults at Saif and Sara as they made their way out of the stadium has gone viral. 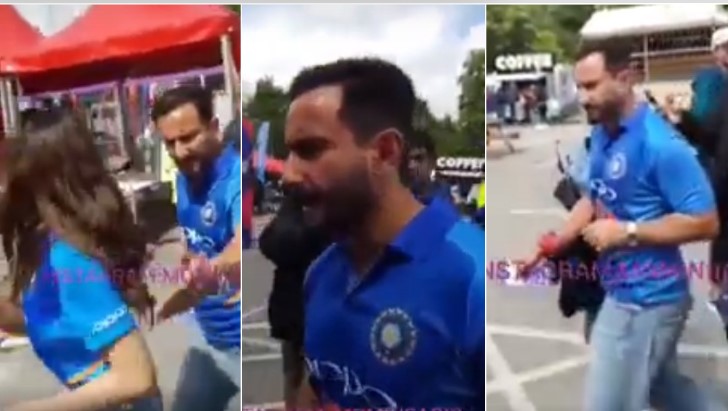 In the viral video (watch below), Saif could be seen making a hasty exit after the match, which was comfortably won by India. He soon found himself being followed by a rude Pakistani fan, who could be heard making disparaging remarks about Saif and his daughter.

The Pakistani fan, whose face is not visible in the video, is heard commenting, “As you can see, the eleventh man, the water boy, has arrived here now. He’s acted in many films against Pakistan. He’s killed many people (in films). Masha Allah, he’s supported his team with full enthusiasm.”

The voice of the Pakistani fan then addresses Saif mockingly, “Sir, thank you very much for blessing with your presence.” Referring to a girl walking with Saif, the voice says, “This is his daughter princess. The girl walking Saif was believed to be actress Pooja Bedi’s daughter Alia Furniturewala.

India on Sunday had defeated Pakistan by 89 runs, taking their head-to-head record in World Cup competitions to 7-0. Saif was among the big list of Indian celebrities, who had travelled to England to watch the match. At one point during the match, one of the stadium’s TV cameras had captured him sitting worried. One of the commentators had described how his father, Mansoor Ali Khan Pataudi, had captained the Indian cricket team. The said commentator had also paid rich tribute to his father’s amazing career as a cricketer.

Saif’s son Ibrahim, who lives in England, is often seen posting videos of his cricket match.

Contrary to how Saif and Alia were insulted by a Pakistani fan, another Bollywood actor, Ranveer Singh, was recently hailed for his magnanimity after a video of Simmba  actor consoling a distraught fan from the neighbouring country went viral.