A video of a Noida woman using filthy expletives for the people of Bihar has gone viral on social media prompting netizens to demand her arrest. 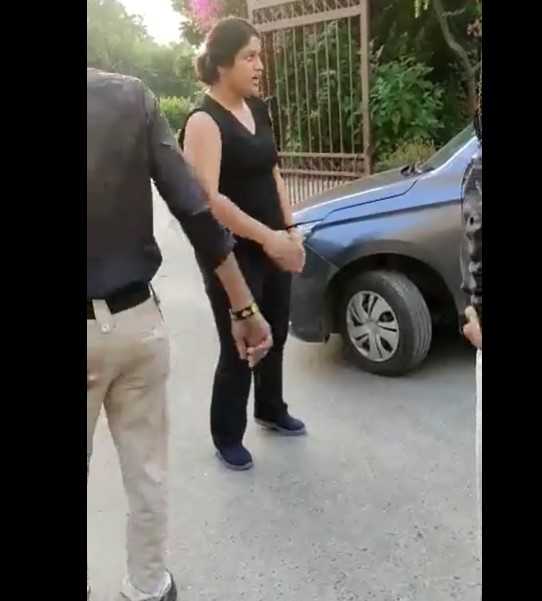 In the viral video, the woman in question could be seen making an obscene gesture as she abuses Biharis before physically assaulting a security guard. The incident reportedly took place in the Jaypee Housing Society of Noida. The woman has been identified as Bhavya Rai.

After the video went viral, Twitter users have been tagging the Noida Police to ask why the woman has not been arrested. She was booked under Indian Penal Code sections 153A (acts prejudicial to harmony), 323 (voluntarily causing hurt), 504 (intentional insult to provoke breach of public peace) and 506 (criminal intimidation) among others.

Delhi Commission for Women chief Swati Maliwal tweeted, “This woman is openly abusing this guard with so much hooliganism and abusing. What kind of vulgarity is this? @noidapolice Strict action is necessary against this woman.”

One user wrote, “Taking advantage of being a woman, abusing an entire state by targeting, holding the collar of the security guard, abusing the current. Such people should have no place in a civilized society. shameful.”

Another wrote, “She might be a Tyagi, Mishra, Pandey or Tripathi. After pan India outrage, her caste people will gather and absolve her and finally extend their support that’s how we dealing abuse nowadays.”

Not too long ago, the police had arrested BJP leader Shrikant Tyagi, who was seen abusing and assaulting a woman in another housing society in Noida. He was later released on bail as the police did not oppose his release allegedly due to his association with the BJP.

Tens of thousands of people belonging to Tyagi’s upper caste Hindu gathered in Noida in his support on Sunday. It remains to be seen if a similar show of strength from Bhavya’s community would be displayed in days to come.