India’s spectacular win in yet another World Cup match against arch-rival Pakistan left fans from the neighbouring country in a state of shock. While criticism has poured in on the poor display of Pakistani cricketers, skipper Sarfaraz Ahmed has faced the most brutal attack for controversially electing to field after winning the toss. His decision came even as Pakistani Prime Minister Imran Khan, himself a World Cup winning captain, advised him to bat after winning the toss. 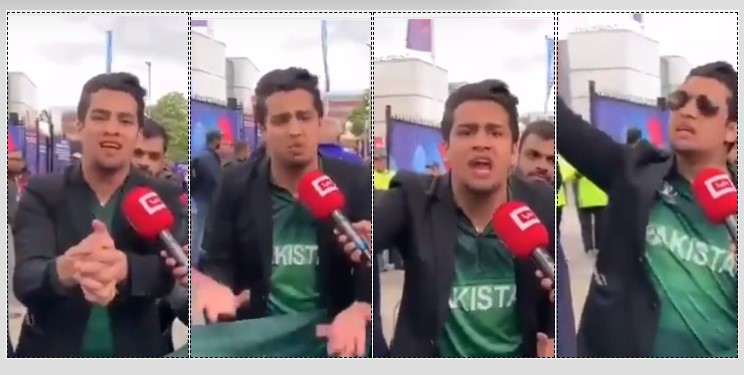 Meanwhile, a video of a Pakistani fan venting out his frustration at the team has gone viral on social media with the clip being fervently shared on WhatsApp. In the video, a Pakistani fan is seen in tears while slamming Pakistani players for lacking motivation and professionalism. The fan is heard saying, “I swear I’ve been informed that they were eating burgers last night. They were eating pizza. Make them take part in a wrestling match instead of representing our country as cricketers.”

His rant continued even as his friends consoled him by repeatedly saying, “hausla rakho (Have courage).”

Poor Pakistani fan! Says ‘mohabbat is a two-way traffic.’ Lashes out at Pakistani players for eating burgers, ice cream hours before their match against India. ???

Social media platforms have also been replete with videos of fans abusing their cricketers in the face of defeat. Others have chosen to vent out their frustration through social media posts on Twitter and Facebook. Indian fans too joined in posting memes and jokes on their team’s seventh straight win in the World Cup competition.

Congratulations to Team India for being stellar and a force to reckon with ????????????

Also shout out to Pakistani fans for having a sense of humour ?

Shit to Pakistani cricket team .
This team disappoint us everytime . Sarfaraz’s behaviour in match was as if he had just woke up five minutes before ‘Sehri’.#سرفراز_کو_گھر_بھیجو pic.twitter.com/IQnyEvImRU

I am thinking about suing Anukhka sharma and the director of movie PK, because while saying “Sarfaraz Dohka nai dy ga” why didn’t they clearly mention that they were not talking about this Sarfaraz? #سرفراز_کو_گھر_بھیجو pic.twitter.com/wVpQ8uoMKU

India on Sunday had defeated Pakistan by 89 runs in Manchester. With this win, India has extended its head-to-head record against Pakistan to 7-0, meaning that Pakistan has never been able to defeat India in a Cricket World Cup match ever.