Vineet Jain owned Times Now TV channel is facing widespread condemnation after the controversial TV channel was caught secretly filming minor Muslim girls remove their hijab outside the school before taking part in the exam. Angry internet users have called the TV channels shameless for their ‘disgusting’ piece of voyeurism in the name of journalism. 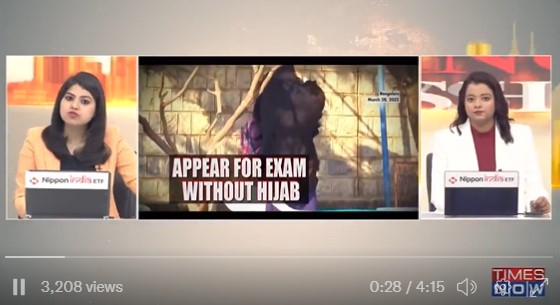 Times Now shared the video from its official Twitter handle by taking a potshot at those supporting the Muslim girls’ right to wear hijab. It wrote, “Big message to ‘hungama lobby’; students put kitab over hijab. 8 lakh+ students appear for SSLC exam.”

Angry social media users slammed the TV channel for throwing ethics of journalism out of the window since many girls could easily be identified in the video. One user wrote, “Oh! Gold class journalism..! You secretly took video of girls removing hijab and celebrating it as a victory…! What is the big message in it?”

“Shame on u @Swatij14 @RichaSharmaB is this good filming girls without thr consern? Rights to privacy? Can somebody film you guys too will u like it?” asked another user. One user wrote, “I am for uniform, but this is absolutely not right to film the students. If they have made the choice then kindly respect and encourage them. Kindly adhere to privacy protocols.”

The Karnataka High Court recently upheld the ban on Muslim girls’ right to wear hijab in schools and colleges in Karnataka. Students have challenged the verdict in the Supreme Court but Chief Justice of India NV Ramana has refused to list the matter even after lawyers highlighted how a delay would adversely impact students’ ability to sit for exams.

Desperate to not miss out on their exams, these students have agreed to remove hijab before sitting for the exam, but Times Now TV channel decided to publicly shame these helpless minor girls.