A video of Nita Ambani’s daughter-in-law Shloka Mehta carrying her 15-month-old son Prithvi to school has evoked reactions from netizens. Prithvi’s billionaire grandfather Mukesh Ambani has reportedly vowed to ensure that the youngest member of the Ambani family leads a normal life. 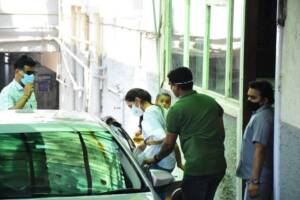 In a viral video, Shloka was seen getting inside a car as Prithvi started his first day at Sunflower School in Mumbai’s posh Malabar Hill. This is the same school where Prithvi’sparents, Shloka and Akash Ambani, also went to receive their early education.

According to reports, both Akash and Mukesh Ambani have taken extra efforts to ensure the safety of Prithvi, who was born on 10 December 2020.

To start with, Prithvi will only spend half a day at the nursery in order for him to get accustomed to the school environment.

Mukesh Ambani-owned News18 shared a series of photos of Prithvi.

Reliance Industries chairman and managing director Mukesh Ambani’s grandson Prithvi Ambani was seen with his mother Shloka Ambani on his first day of school in Mumbai on Tuesday.#PrithviAmbani pic.twitter.com/s7lOpEIJs7

As expected, the video of Shloka carrying her son to school evoked plenty of reactions from Twitter users.

Mukesh Ambani sent his grandson to the normal school name of Sunflower Nursing School
Seems like, he wants him to go through a normal life
Kudos to you ????????#PrithviAmbani pic.twitter.com/dogCJyQZcD

Wow I am amazed and happy to see the grandson of Mukesh Ambani joining primary school as his parents has dropped him today#PrithviAmbani pic.twitter.com/QwVazgegK4

Yes, this cute little kid of Prithvi Ambani, Mukesh Ambani’s grandson, who has set foot in nursery school without any VIP treatment ???? pic.twitter.com/bSgfvEygrJ

Shloka gave birth to a baby boy on 10 December last year. The bay was named Prithvi Akash Ambani as proud Mukesh Ambani flaunted his first photo with the newborn.