A video of Hindu devotees consuming alcohol and dancing to Bollywood song during the Ganpati procession in Gujarat has gone viral. The incident took place in Gujarat’s Surat district. Police have launched an investigation after facing a barrage of criticism since the BJP-ruled Gujarat is a dry state. Police have also arrested eight men so far. 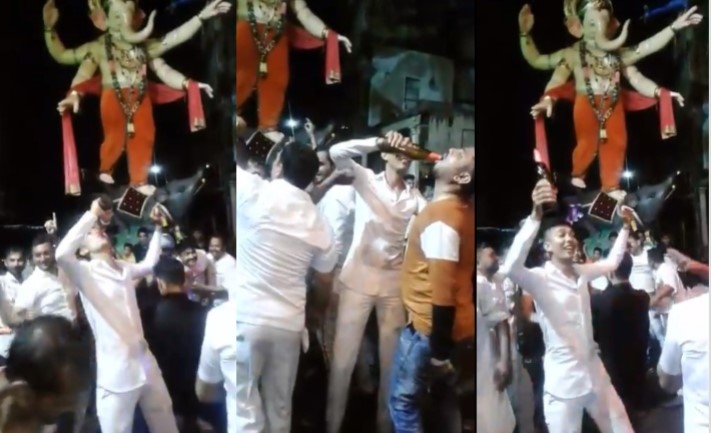 In the video, a group of men, mostly dressed in white clothes, are seen dancing and consuming beer while Saqi Saqi track from John Abraham-starrer Batla House is played in the background. A large idol of Hindu God Ganesha could be seen in the background.

The video was first shared by Times of India on the microblogging site Twitter.

Police have launched a probe after some men were seen dancing while consuming beer during a #Ganpati procession in #Surat #Gujarat pic.twitter.com/1l8uLszAtI

No sooner did the video emerge on social media platforms, criticism poured in for the Hindu devotees for defaming their religion.

This is insulting to our culture.

That’s common in mumbai, but yes as Gujarat is dry state its more concerning

What kind of a celebration is this. Drinking and celebrating Ganpati is being disrespectful to Bappa

According to the Indian Express, all eight men have been booked under IPC sections 153 (giving provocation with intent to cause riot), 295(a) (deliberate and malicious acts, intended to outrage religious feelings of any class by insulting its religion or religious beliefs), 143 (unlawful assembly), 188 (disobedience to order duly promulgated by public servant) and 120 (B) (criminal conspiracy) and also under relevant sections of the Gujarat Prohibition Act.