Popular Indian dairy brand, Amul, is facing growing criticism for its support to pro-Hindutva Sudarshan TV, whose programme promoting hate against Muslims was banned by the Delhi High Court on Friday. Angry netizens have trended hashtag #BoycottAmul on the microblogging site Twitter for Amul’s decision to sponsor Sudarshan TV even after the Delhi High Court stopped the TV channel’s controversial programme from broadcast. 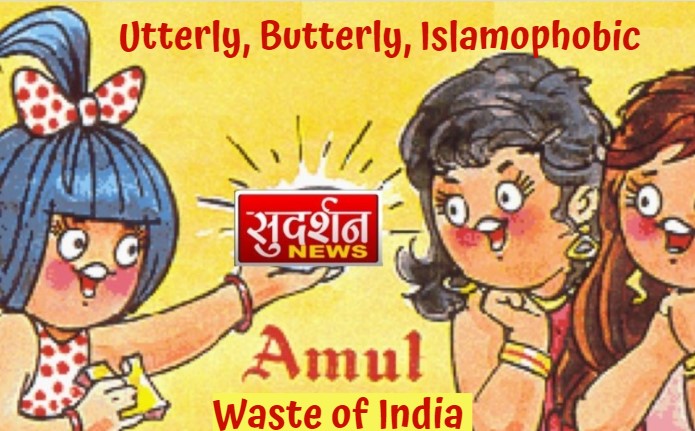 Angry Twitterati took to Twitter to express their disappointment against what has been an iconic brand in India. UK-based ‘Stop Funding Hate’ group urged Amul to reconsider its decision to support a TV channel, notorious for spreading Islamophobia. It tweeted, “Hi
@Amul_Coop – we’ve been seeing a lot of concerns being raised about this TV show so it would be great to know your response. Is this something you’re happy to endorse and be aligned with, or will you consider distancing yourselves?”

Other Twitter users were more scathing in their criticism with some even twisting the brand’s tagline ‘Utter Butterly Amul’ to ‘Utterly, Butterly, Islamophobic Amul’ and ‘Taste of India’ to ‘Waste of India.’

I will not use any amul product in future..

Sponsoring the Hate Monster like @SureshChavhanke ,who promotes Hatred against MUSLIM.

From exploiting animals in dairy to hiding the truth from consumers, @Amul_Coop is the waste of India. Stop spreading hate Amul. #boycottAmul #Amuliscruel pic.twitter.com/ZL2JOFcmAI

The single-judge Bench of Justice Navin Chawla on Friday had ordered a stay on the broadcast of Sudarshan TV’s programme and issued a notice to the Centre’s Narendra Modi government. The High Court, according to Bar and Bench had said, “Having considered the submissions made, till the next date of hearing, the respondent nos.3 and 4 (Sudharshan TV and its Editor-in-Chief Suresh Chavhanke) are restrained from telecasting the programme titled ‘Bindas Bol’ scheduled to be telecast at 8.00 p.m. today. In the meantime, the respondent no. 1 (Centre) shall decide on the notice issued and place its decision before this court.”