Salman Khan on Saturday night welcomed over a dozen contestants as he formally unveiled the new edition of Bigg Boss. Also joining Salman were three past contestants namely Siddharth Shukla, Hina Khan and Gauhar Khan. While welcoming Siddharth, the last edition’s winner, Salman taunted him by asking Shukla if he had failed to secure any job since winning Bigg Boss 13. The inaugural night also saw Siddharth and Gauhar get engaged in a war of words as Salman flashed old tweets by the latter targeting the former when he was inside the Bigg Boss house. 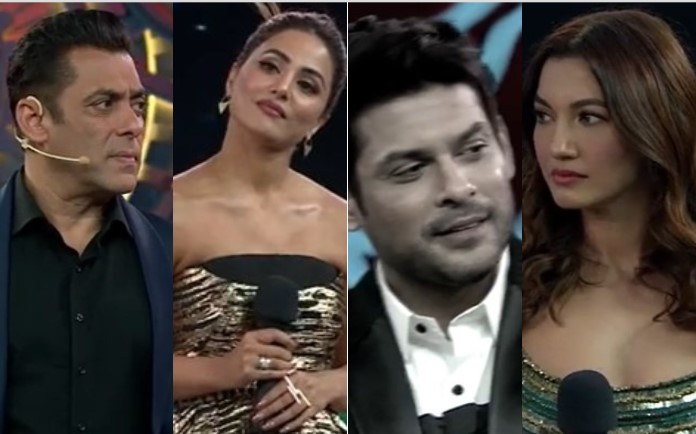 Sharing his frustration, Siddharth said that he had hoped to land new projects for himself but he ended up returning to Bigg Boss. To which, Salman said, “Bad, very bad.”

In the video shared by Colors TV, Salman was seen asking Gauhar to read out the tweets that she had posted when Siddharth was inside the BB house. Gauhar read, “Hashtag Gali Ka Gunda, Khaane Ka Saleeqa Nahi. Baat Karne ki tameez nahi. (Hashtag roadside goon. He lacks etiquette while eating food and doesn’t know how to talk to others.)”

Gauhar explained that she had a problem with abuses used by Sidharth during his frequent fights inside the Bigg Boss house. Siddharth asked, “Had you heard those abusive words?” Gauhar replied, “I had heard each and every word.”

Hina, for her part, said that she was not prepared to judge anyone by his behaviour on a reality show.

Reading out another tweet, Gauhar said, “Poke Poke Poke. Wow, I thought a poke wouldn’t affect a mountain-like person. Is everything legitimate in the guise of poke? Show some patience and normalcy.”

In response, Siddharth said, “Whatever I was, that was me.”

Gauhar replied, “Sir, you don’t listen to others.”

Gauhar had frequently condemned Siddharth’s abusive and violent behaviour when he was seen fighting with other contestants particularly with Asim Riaz during Bigg Boss 13.