Friday saw quite an extraordinary hearing on the Islamophobic broadcast by pro-Hindutva Sudarshan TV as the Bench comprising Justice DY Chandrachud, KM Joseph and Indu Malhotra made scathing observations against the TV channel for spreading hate speech. Like Justice Chandrachud, Justice Joseph too concluded that the broadcast by Sudarshan TV was intended to malign the Muslim community. 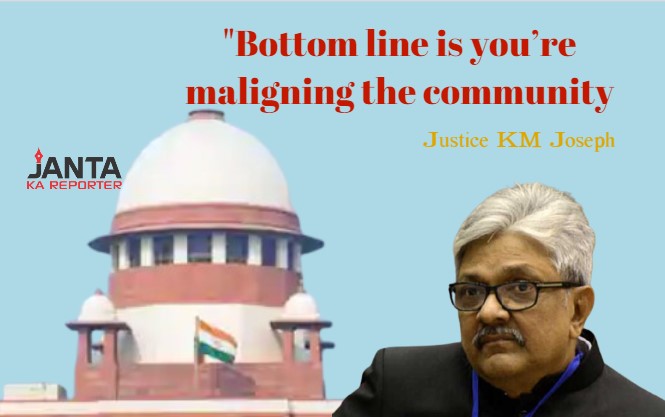 According to Livelaw website, Justice Joseph told Sudarshan TV’s lawyer Shyam Divan, “What kind of attitude are you inculcating with this? When 4 episodes have already been broadcast ? Will you continue with this rant ? There are other communities also who want to “capture the power”. The bottom line is you’re maligning community.”

Justice Joseph also cited his personal example stating how his own clerk was a Jain, a religious minority group in India, adding that there was nothing wrong for minority groups to encourage their people to excel in civil services. “Apart from Muslims, there are Jains. My law clerk is Jain & he went through Code. They want to promote those people in their community. There is nothing wrong with that as they’re marginalised communities. By taking this way, you will drive them into wrong hands,” Justice Joseph said.

The Supreme Court judge also highlighted the fact how even the government of India was keen for the Muslim community’s upliftment in society. “Not just Muslims, but every backward community. The fact that 50% comprised of people from marginalised communities should have been a matter of joy for our country,” Justice Joseph said.

Justice Joseph: Apart from Muslims, there are Jains. My law clerk is Jain & he went through Code. They want to promote those people in their community. There is nothing wrong with that as they’re marginalised communities. By taking this way, you will drive them into wrong hands.

Responding to Shyam Divan’s argument against the prior restraint of Sudarshan TV’s controversial programme, Justice Joseph said, “You said that there shouldn’t be prior restraint, and we should wait till the end of the series. What are the consequences that will await you if you violate the Code?”

Earlier, Justice Chandrachud, who was heading the Bench, had said that ‘let a message go to media that a particular community cannot be targeted.’