Rahul Mishra is an ace fashion designer, who had designed dresses for Shloka Mehta and her family members for the pre-wedding functions in 2019. Mishra has now revealed a series of throwback photos of Radhika Merchant, the to-be daughter-in-law of Nita Ambani. Not only did Rahul present Radhika in a remarkably elegant avatar, he also disclosed the social media account of Radhika. This proves that all the three important ladies namely Shloka Mehta, Isha Ambani and Radhika Merchant exist on Instagram. 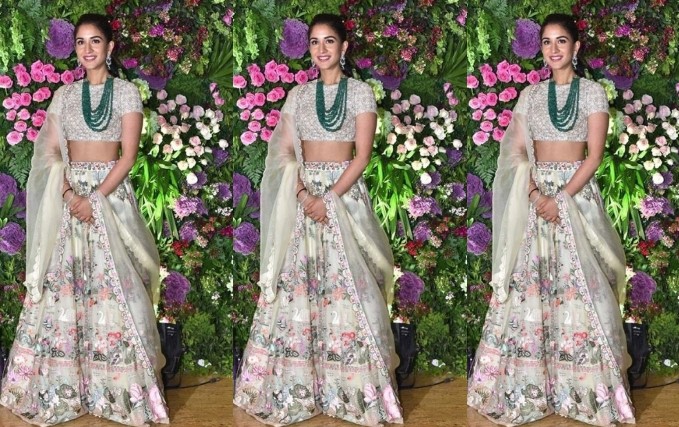 While sharing a photo of Radhika, Rahul wrote, “A throwback to elegant Radhika Merchant @radhikamerchant wearing the hand embroidered, ‘Hans Bageecha’ Lehenga from our Festive Couture Collection, Malhausi Monaco.” In the photo, the youngest woman associated with India’s richest family was seen wearing a hand embroidered, ‘Hans Bageecha’ lehenga from his Festive Couture Collection, Malhausi Monaco.
The lehenga was an interpretation of a natural overgrowth by a lakeside, from the designer’s personal memory articulated on dyed butter yellow silk organza.

In another photo, Radhika Merchant looked enchanting in a peach number from Rahul Mishra’s Festive Couture Collection, Marasim. While sharing the photo, Rahul wrote, “Only a beautiful smile makes a look complete.”

Reacting to Rahul’s photos, Radhika Merchant made a rare public comment on social media as she wrote, “Thank you for this beautiful outfit.” Rahul replied, “you make this outfit look so beautiful ?” 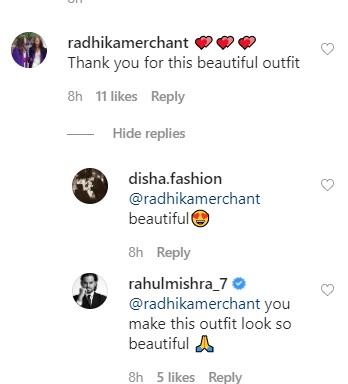 Last year, Rahul had revealed for the first time how he dressed not just Shloka but her brother, sister, sister-in-law and parents during her wedding in March 2019. Shloka was seen dressed in a white multicoloured lehenga choli and was joined by her sister-in-law (her brother’s wife) Nisha Mehta and sister Diya Mehta.