Sudhir Chaudhary of Zee News on Wednesday went LIVE on TV to fly the flag for the Centre’s Narendra Modi government after the Supreme Court stayed the draconian sedition law. The same day Chaudhary concluded that the time was right to end the colonial-era law. However, the controversial anchor soon began to face widespread ridicule as netizens accused of glaring hypocrisy in his bid to appease the BJP-led government. 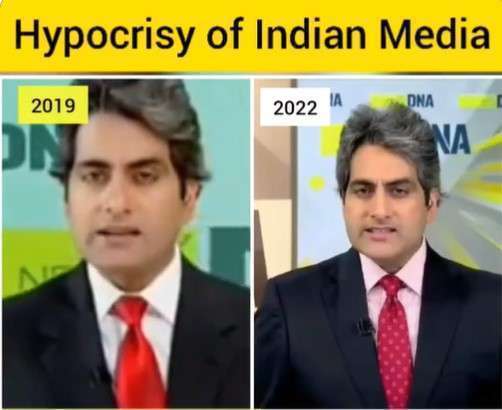 Chaudhary went on to lecture his viewers how the sedition law had become irrelevant since this was enacted during the British rule by the then colonial powers.

“The sedition law is a law from the British era. Today, I want to tell you that a law that the British had enacted to curb and jail Indian freedom fighters, is now being abused in independent India.”

Chaudhary rightly pointed out how anyone criticising the government was likely to face sedition charges, but he did not cite examples of Umar Khalid, Siddique Kappan and many others. He used the example of Amravati MP Navneet Rana and her MLA husband Ravi Rana since both of them had to be jailed recently for threatening to recite Hanuman Chalisa outside the private residence of Maharashtra Chief Minister Uddhav Thackeray.

But, the anchor’s detractors decided to shame him for a different reason altogether. Eagle-eyed amongst them were quick to highlight how the same Zee News anchor had batted for the BJP in criticising the Congress Party just before the 2019 parliamentary polls after the latter pledged to abolish sedition law if it returned to power.

Chaudhary’s perceived hypocrisy on the issue of sedition within the last three years did not go down well with his critics. As expected, netizens began to slam the anchor as they asked him to have ‘some shame.’

Rohan Gupta of the Congress tweeted, “Godi media’s hypocrisy knows no bounds. Anchor Sudhir Chaudhary slammed Congress and indirectly campaigned against the party when we promised to repeal the “Sedition Law” in 2019. The same individual is now hailing Modi for his decision to re-examine and repeal the Sedition law.”

BV Srinivas of the Youth Congress tweeted, “Sudhir Chaudhary’s DNA was conducted and result showed that he was not a journalist.”

Anchor Sudhir Chaudhary slammed Congress and indirectly campaigned against the party when we promised to repeal the "Sedition Law" in 2019.

The same individual is now hailing Modi for his decision to re-examine and repeal the Sedition law. pic.twitter.com/oNKlIv25OM

Chaudhary has often faced ridicule for being the flag-bearer of the BJP. Zee Media owner Subhash Chandra had to once come on the LIVE TV to clarify that his channel was not a BJP mouthpiece.