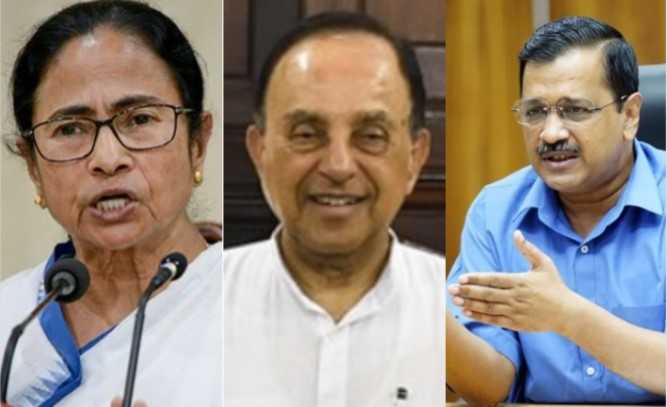 Highlighting the woes of regular power cuts in the national capital, Swamy wrote, “Why is the electricity vanishing in Delhi for hours ? Kejriwal is incompetent or has given bijlee free to Jhugees? In no other major city bijlee vanishing for hours.”

One of Swamy’s followers highlighted how residents in Kolkata enjoyed an uninterrupted power supply under the Trinamool Congress government. The Twitter user wrote, “Electricity is the best in Kolkata,we get uninterrupted supply for months and months.Hardly there is any power cut.”

Responding to the Twitter user, Swamy replied, “I always knew Mamata Banerjee is an intelligent leader. We have to recognise talent even if we have ideological differences.”

Kejriwal, who came to power promising free water and electricity supply, has been lately facing the anger from Delhiites as they complained of power cuts during the incredibly hot summer. Some of them had taken to social media to share their woes. One user wrote, ” No current for last 20 minutes; CA#100100373 ;please restore power at the earliest; please also inform how will consumer be compensated for these unplanned shutdowns being done by BSES everyday sometimes 2-3 times.”

Another user had written, “Why there is a power cut in this scorching heat that too often in subhash vihar north ghonda, Delhi?
Please take urgent action.”

The government headed by Kejriwal has not explained the reason behind regular power cuts at a time when people in India’s national capital faced one of the hottest summers in recent times.