Shehnaaz Gill aka Punjab’s Katrina Kaif was recently left stunned when Siddharth Shukla mistook suspected a fan of the former Bigg Boss contestant as her boyfriend. Faced with a predicament, Shehnaaz wasted no time in clarifying that the person sending ‘love’ from Punjab was just a fan. A visibly uncomfortable Shehnaaz also asked Siddharth if girls posting messages during his LIVE session were his girlfriends. 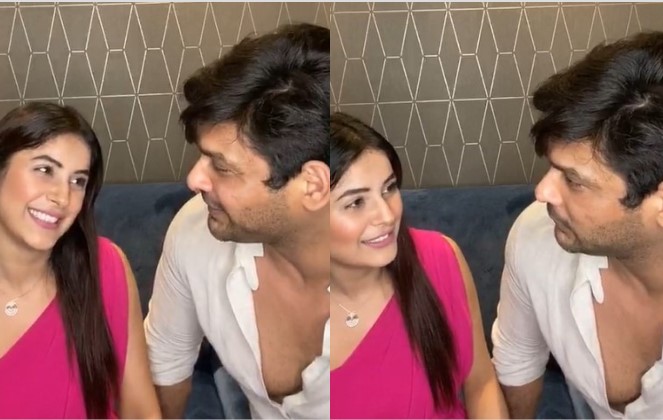 She warned Siddharth, “bakwas mat kar. (Don’t speak nonsense).” Of course this was all part of their friendly banter when the two decided to appear on their first-ever Instagram LIVE session.

Not to be left behind, Siddharth asked Shehnaaz if she had unfollowed Gautam Gulati, who she had claimed to have a crush on during the Bigg Boss show. Shehnaaz asked Siddharth to not refer to that incident since the reality show was over.

During the LIVE show, both Siddharth and Shenaaz vowed to remain together for the rest of their life. A fan said during their joint LIVE session on Instagram, “Even if you don’t get married, you should live together for the rest of your life.” This left Shehnaaz excited as she asked Siddharth to give her a high five. Though Siddharth did not pronounce in as many words, but he appeared to agree with Shehnaaz on spending rest of his life with Shehnaaz. He, however, did not agree with one of his fans on the need to marry Shehnaaz.

This was after a fan suggested, “You guys should get married as soon as possible.” This evoked a sarcastic reply from Siddharth, who said, “Yes, this is exactly what we wanted to know when we decided to come LIVE.”

Shehnaaz informed that the reason for both of them coming LIVE was to make their fans happy.