Punjab Kings cricketer Shikhar Dhawan recently informed his fans how his Dad had knocked him down in anger after his team, Punjab Kings (PBKS), failed to qualify for the play-off stage in IPL 2022. The video shared by Dhawan has set the internet on fire even though this was recorded to regale his fans. 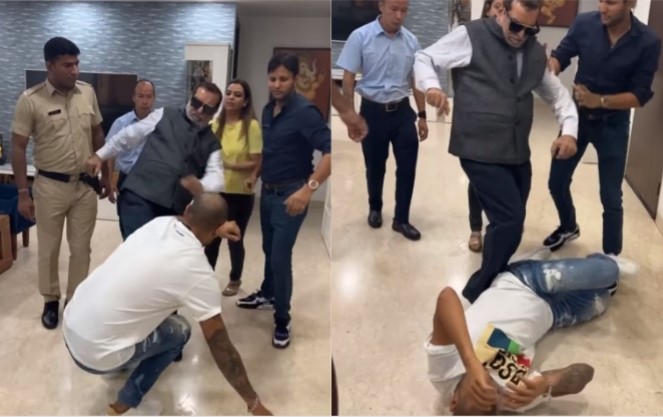 Sharing the video, Dhawan wrote, “nock out by my dad for not qualifying for knock outs 🤣😝.”

In the video, Dhawan’s father is seen slapping and kicking the Indian cricketer as a scene from a Bollywood film plays in the background.

Both Dhawan and his Dad are now winning hearts for their acting skills as the video evoked plenty of reactions. Former India cricketer Harbhajan Singh commenting, “Bappu tere se bi upar ka actor nikle.. kya baat hai. (Father turned out to be a bigger actor than you. What a feat).”

Dhawan’s Punjab Kings finished sixth in the IPL points table and failed to make it to the knockout stage. Top four teams of this year’s IPL were Gujarat Titans, Rajasthan Royals, Lucknow Super Giants and Royal Challengers Bangalore. While Gujarat Titans have already booked their place in the final, Rajasthan Royals and the RCB will lock horns today to face Hardik Pandya-led team for the ultimate IPL glory on Sunday.

The RCB had defeated the LSG by 14 runs to knock the latter out of the competition. This was possible by an extraordinary knock played by young Rajat Patidar, who remained unbeaten at 112 from 52 balls.