Shehnaaz Gill aka Punjab’s Katrina Kaif left Siddharth Shukla gobsmacked by laying claim on Bigg Boss trophy. She went on to ‘threaten’ to ‘rip apart’ everyone during LIVE video.  The model from Punjab said that she will ‘rip apart’ everyone if the trophy was not handed to her. 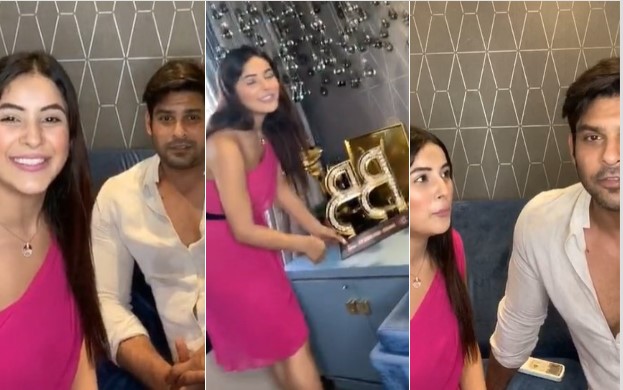 Shehnaaz stunned Siddharth by getting up during the LIVE video to say, “Today, I have come here to do my job.” She then went to the Bigg Boss trophy, which was kept on a table and said, “This is mine, right?” Siddharth replied, “No that’s not yours.”

Shehnaaz continued addressing the trophy, “You are mine will always be mine. You belong to me only. Else, I will rip apart everyone.”

Of course, this exchange took place in a light-hearted manner as the two good friends met after a long time. Both Shehnaaz and Siddharth were also asked about their plans to get married. Siddharth said, “Yes, that’s why we came LIVE to know if we should get married or not. I mean the only purpose should be to get married in life.”

Both Siddharth and Shehnaaz, however, agreed to live together for the rest of their life. A fan commented that they should never part ways even if they don’t get married. To which, Shehnaaz and Siddarth agreed with the fan’s suggestion by giving high-five to each other.

Shehnaaz explained that the reason for both of them joining for a LIVE video was in response to requests from fans.