In a setback to fans of Shehnaaz Gill aka Punjab’s Katrina Kaif, Siddharth Shukla has publicly professed his love for this year’s Bigg Boss contestant, Nikki Tamboli. This prompted many including Gauahar Khan to tease Siddharth linking him romantically with Nikki. 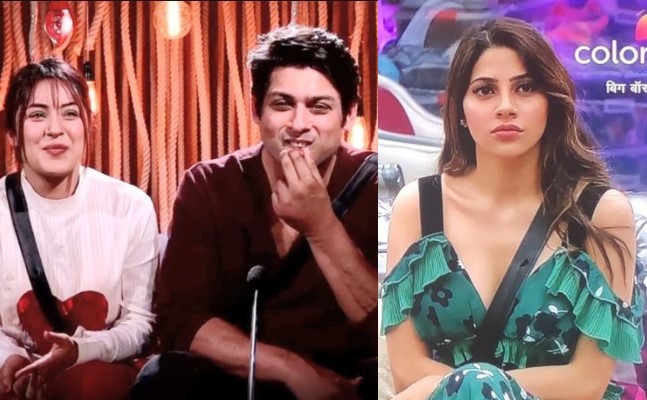 While resting in the bedroom, Gauahar Khan teased Siddharth by saying, “Nikki Siddharth ki favourite hai.” Siddharth’s friend Jasmin Bhasin asked Siddharth, “Are you sure you two did not know each other from outside?”

Gauahar asked Siddharth, “Siddharth, what will you do if she seriously falls in love with you?” Siddharth replied, “What do you mean by will fall in love? She is already in love (with me). And I too am in love (with her) from Amravati. She already loves me.”

Siddharth then repeated the lines from a popular Bollywood song Khullam Khulla Pyar Karenge Hum Dono. (Both of us will profess our love openly).

Also in the house, Siddharth was seen praising Nikki for her hard work and attention to detail. He told Gauahar Khan, “Today when nobody was doing anything, Tamboli took the broom and cleaned the entire area. She does it quietly without making a noise about it. There are others, who shout that they are making paratha stuffed with potatoes.”

Shukla also said that Tamboli was organised as she knew what she was doing.

Before entering the Bigg Boss house, the southern siren had told Times of India that Shehnaaz and her fans shouldn’t have any problem if Siddharth and she become friends.

The chemistry between Siddharth and Shehnaaz was the highlight of the last edition of Bigg Boss prompting fans to trend the hashtag #SidNaaz. However, with the arrival of Nikki Tamboli, it seems Sidnaaz is now officially going to be history.

Siddharth was the winner of Bigg Boss 13 and he will be inside this year’s reality show for at least 14 days along with Gauahar and Hina Khan.