Congress MP Shashi Tharoor has apologised for wrongly attributing a couplet to famous Urdu poet Mirza Ghalib. What was, even more, embarrassing for the lawmaker from Thiruvananthapuram was that he also got the celebrated poet’s birth anniversary horribly wrong. 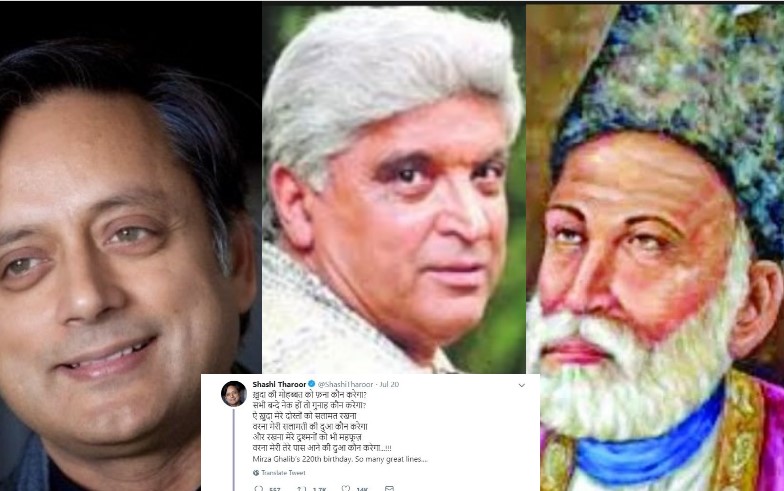 Taking to Twitter on Saturday, Tharoor had posted a couplet in Hindi claiming them to have been penned down by Ghalib. However, soon many including poet and lyricist Javed Akhtar pointed out that the lines shared by Tharoor had not been written by the great poet.

Realising that Ghalib’s birth anniversary is 27 December and not 20 July, Tharoor tweeted, “Ghalib is an all-time favourite, but today is not his birthday. I was misinformed. Relish the lines anyway!.”

Meanwhile, Javed Akhtar too corrected Tharoor, albeit politely, “Shashi ji, whoever has given you these lines should never be trusted again. It is obvious that someone had planted these lines in your repertoire to sabotage your literary credibility.”

Shashi ji , who ever has given you these lines should never be trusted again . It is obvious that some one had planted these lines in your repertoire to sabotage you literary credibility .

Tharoor too did not hesitate in admitting his mistake as he shared his apology, “Thanks to @Javedakhtarjadu & other friends, I realize I’ve been had. The lines are not Ghalib’s. Just as every clever quote is attributed to Winston Churchill even if he never said it, so it seems that whenever people like a shayari, they credit Ghalib for it! Apologies.