Republic TV founder Arnab Goswami has lashed out at Delhi Chief Minister Arvind Kejriwal and his deputy, Manish Sisodia, in the alleged liquor scam case. The Republic TV founder, himself a beneficiary of Kejriwal’s crores of rupees worth of funding through government ads, took a dig at other TV channels for not discussing the alleged scam in the Delhi government. 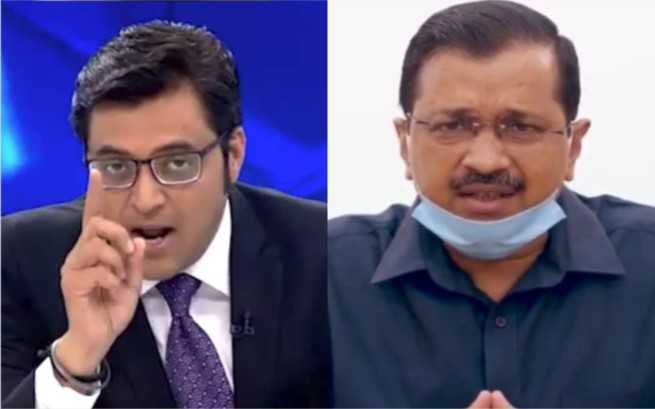 Mincing no words, Goswami asked several questions demanding their answers from Kejriwal and Sisodia, who was at the centre of CBI raids last week.

Using the hashtag #LiquorScam, Goswami mocked other TV channels for choosing to not hold debates on the topic even when the issue had become a topic of intense conversations all across the country. “What is fantastic about this debate on Republic dear viewers is that this is the only channel in the country, this is the only network in the country, which is discussing the scam.”

The Republic founder didn’t stop her. His next reply left the AAP representative red-faced as his attempt to praise Goswami backfired.

Goswami said that it was his responsibility to inform his viewers about the liquor scam. AAP spokesperson Akshay felt that praising Goswami would mean that the Republic founder would go easy on him. Trying to win over Goswami, Akshay said, “Arnab I don’t want your good name to be soiled by false allegations of the BJP on an important show like this.”

However, Akshay was left embarrassed as Goswami replied sarcastically, “Thank you for your concern about my good name…Do you agree that your government (led by Kejriwal) carried out an act of corruption?”

CBI recently raided 21 locations including the official residence of Manish Sisodia for his alleged role in what’s being billed as the liquor scam.