Sara Ali Khan and Janhvi Kapoor have been two of the most sought-after star children in Bollywood even before they made their acting debut from Kedarnath and Dhadak respectively. So, when both actors came together to shoot a fitness video under the watchful eyes of celebrity trainer Namrata Purohit, sparks were bound to fly, setting the internet on fire. 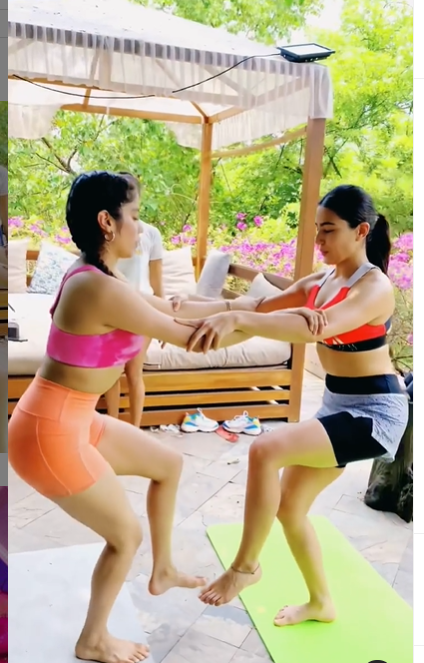 Sharing the video her workout with Janhvi, Sara wrote on Instagram, “Go with the flow ???? Steady and slow ????‍♀️???? Kick high- squat low ????️‍♀️ That’s how you’ll get the golden glow ✨ For better instructions ask @namratapurohit to show.”

Both were seen engaged in low-impact exercises involving lunges, squats, leg raises, donkey kicks with weights at the ankles. The fitness freak youth icons also used dumbbells to enhance their exercise routine. At one point both were seen holding each other for support while they squatted.

The video also gave us a glimpse of celebrity fitness instructor Namrata Purohit, whom Sara had tagged to consult for better instructions.

Surprisingly Janhvi did not share the same video on her Instagram page even though she shared several photos and a video with Namrata. But this did not stop Bollywood fans from appreciating the fitness video shot by both Sara and Janhvi. One fan wrote, “This video is going to break the internet in a couple of minutes.” “Two beauties together???????????????????? Glad to see u girls doing work out together❤️❤️❤️❤️❤️,” commented another fan.