Navika Kumar of Times Now recently trended for days after she was seen respectfully walking alongside Uttar Pradesh Chief Minister Yogi Adityanath as the BJP leader officially flagged off an election bus belonging to the TV channel. Days later, Navika shared a group photo of five former Congress union ministers using an analogy from the Bollywood blockbuster Sholay to take potshots at the growing rebellion within India’s oldest political party. Soon, Congress supporters began to give grief to Navika reminding her what her former boss and Republic TV founder, Arnab Goswami, had said about her in a leaked WhatsApp chat. As social media conversations gained momentum, the word ‘kachra’ became a trending topic. 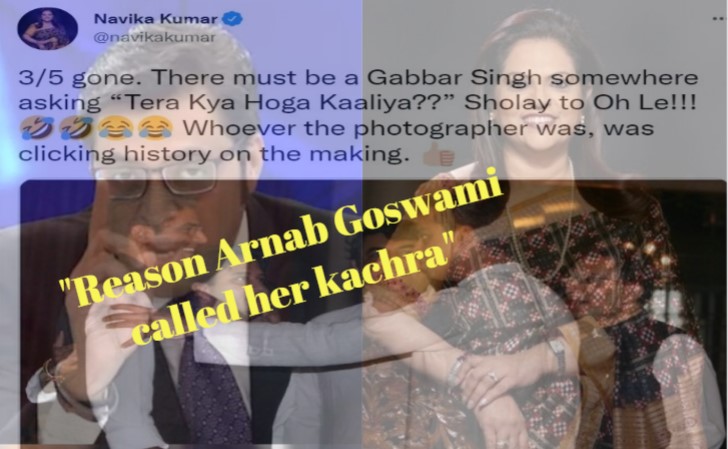 Sharing a photo of Sachin Pilot, RPN Singh, Milind Deora, Jitin Prasada and Jyotiraditya Scindia, the controversial TV anchor had tweeted, “3/5 gone. There must be a Gabbar Singh somewhere asking “Tera Kya Hoga Kaaliya??” Sholay to Oh Le!!! Whoever the photographer was, was clicking history on the making.”

Navika also used emojis of rolling on the floor laughing and Face with tears of joy to highlight just how excited she was about the goings-on in the Congress party. Her tweet was in reference to the news of RPN Singh leaving the Congress to join the BJP ahead of the Uttar Pradesh assembly polls. Incidentally, RPN Singh is the husband of Sonia Singh, Editorial Director of Navika’s rival TV channel, NDTV.

Last year, Arnab Goswami’s leaked WhatsApp chat had caused tremors in Indian politics with the Congress demanding a joint parliamentary committee probe accusing the Narendra Modi government of having compromised national security. In one of the chats, Goswami had called his former colleague Navika Kumar of Times Now ‘kachra (rubbish).’

As expected, Congress supporters began to slam her by reminding her how the Republic TV founder rightly described her ‘kachra.’

I have massive respect for Arnab Goswami #kachra https://t.co/7fG3Mst4AJ pic.twitter.com/EsyUiHFgVS

Ms Kachra living up to her reputation.
For once, I agree with Arnab Goswami ???? https://t.co/e5JR1fRWAo

Arnab is a liar but when he called Navika as kachra he spoke the truth @navikakumar https://t.co/6fmrGdwwF3

Scindia and Prasada too have dumped their old party and are now members of the BJP. Scindia, whose rebellion brought down the Congress government in Madhya Pradesh, is now the civil aviation minister in the Narendra Modi government. Prasada is a cabinet minister in the Adityanath government in Uttar Pradesh. RPN Singh is likely to contest the next month’s polls with some reports suggesting that his wife Sonia Singh too may be fielded as a BJP candidate.

Pilot had led a revolt against his own government in Rajasthan in 2020. However, the intervention by the central leadership had forced him to withdraw his protest. But experts say that he too may not hesitate to quit the Congress if his demands are not met in the future.

As for Milind Deora, his social media posts in recent years have been in line with the ideology of the RSS and the BJP, triggering speculations that he too may not last in his present party for long.