Self-proclaimed Yoga guru Ramdev was left red-faced as a senior functionary of the Indian Medical Association on Monday lashed out at him during a LIVE TV debate. Angered by some of Ramdev’s recent controversial remarks, Secretary-General of the IMA, Dr Jayesh Lele, also questioned Aaj Tak for allowing the controversial godman to advertise his questionable product, Coronil, during the TV debate. 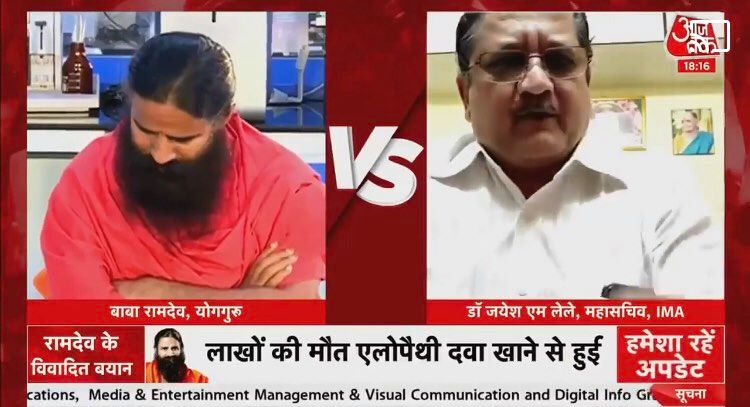 Ramdev made desperate attempts to interrupt Dr. Lele, but he had to face public chiding from the IMA Secretary-General. Dr. Lele even asked Ramdev to shut up as he did not wish to be stopped from making his arguments.

Both Dr. Lele and Ramdev were taking part in a TV debate on Aajtak TV channel. Dr. Lele said, “What’s going on here. Why is he allowed to advertise Coronil in his frame (during this debate)? You should first have that removed.”

Dr. Lele also sought to highlight Ramdev’s hypocrisy saying that he had changed his stance after the IMA served him a legal notice for questioning the allopathy medicine in the treatment of coronavirus. However, just when he was making his point, Ramdev interrupted. Angered by Ramdev’s interruption, Dr. Lele admonished the controversial godman as he said, “Keep quiet. You keep quiet. Allow others to speak. You keep quiet first.”

Even the TV anchor, Anjana Om Kashyap, asked Ramdev to remove Coronil product from the TV frame. “Please remove this Coronil and don’t make this debate a platform for your product’s advertisement,” she said.

Dr. Lele added, “He (Ramdev) has changed his statement only after we served him our legal notice and several FIRs were filed against him at different places…Only yesterday, your Mr. Bansal, the head of Patanjali dairies division died of the corona.”

Ramdev didn’t appear to allow Dr. Lele to make any references to the death of Sunil Bansal, the CEO of Patanjali’s dairies division. But, once again, he had to be publicly admonished by Dr. Lele, who angrily asked him to shut up. “Don’t talk when I am talking,” Dr. Lele.

All Ramdev could say was that Dr. Lele had no right to threaten him. The IMA Secretary-General said that Ramdev’s statements on allopathy medicine had made India a laughing stock globally.

As expected, netizens applauded Dr. Lele’s courage to shut Ramdev up during the TV debate while the controversial yoga guru became a topic of meme fest on Twitter.

Ramdev Baba even not forget to Promote his Coronil on live debate also
Babaji tried Hard to convert This Debate In his Side By unnecessary Logics !
pic.twitter.com/4Lu2YN6fbX

The doctor cuts Ramdev to size also calls out his cheap advert on screen for his product pic.twitter.com/KYpQrGKvjs

It’s Dr Lele’s voice in the video but the feelings are of every single health care worker of this country who is working relentlessly to save people dying from COVID.I request entire medical fraternity to record & share video message for Ramdev to see & know what he’s gotten into pic.twitter.com/BoYr7iUZkr

The interview of #Ramdev with #IMA is seriously problematic. Ramdev keeps Coronil in frame, Anjana wears white coat, the event itself is sponsored by Coronil claiming it to be an evidence based medicine. Conflict of Interest. Scammers teamed up. #ArrestQuackRamdev pic.twitter.com/vSClhjCNem

#Patanjali Consumers after #Ramdev Vs. डॉक्टर लेले Debate on #aajtak to #Ramdev – pic.twitter.com/KhjjqZdqm3

Dr Lele to Ramdev on #aajtak .

Patanjali was recently forced to issue an extraordinary clarification after the Indian Medical Association demanded Ramdev’s prosecution for his ‘allopathy is stupid’ video, now gone viral. Days later, Ramdev had mocked doctors, who had died treating corona patients, and vaccines.