Punjab Kings on Sunday defeated Chennai Super Kings by 54 runs with the team from Tamil Nadu suffering their third straight defeat in the competition. The hero of the match was England’s Liam Livingston, who scored 60 runs before picking two crucial wickets and being involved in a catch out of the CSK’s last batsman. 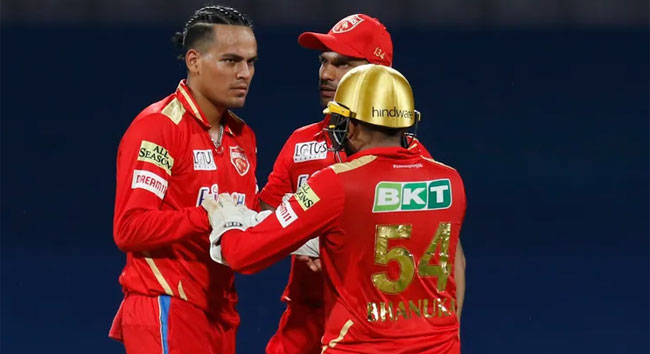 Batting first, Punjab Kings made 180-8 in 20 overs with Livingston smashing a quickfire 60 runs from 32 balls. His knock included five sixes and as many fours. Livingston also hit the longest six of this season of the IPL as it covered a distance of 108 meters.

Chris Jordan and Dwaine Pretorius picked up two wickets each.

Chennai’s run chase began on a disastrous note as they kept losing wickets at a regular interval. They were reduced to 36-5 in 7.3 overs. Shivam Dube and Mahendra Singh Dhoni added 62 runs for the sixth wicket, but the former’s departure after playing a knock of 30-ball 57-runs, Chennai simply surrendered. They were eventually bowled out for 126 in 18 overs.

Reacting to his side’s defeat, skipper Ravindra Jadeja said after the match, “We lost too many wickets in the powerplay, we didn’t find the momentum from ball one. We need to find a way to get better and come back stronger. He (Dube) has been batting so well, he batted well today, keeping him in a good frame of mind would be the key. Definitely we’ll try our best, work hard and come back stronger.”

Mayankk Agarwal, the captain of Punjab Kings, said, “We were thinking we were 5-7 short, but we knew chasing 180 wasn’t going to be easy, especially if we took wickets with the new ball and that’s exactly what we did. Winning that part of the game won us the game.”

Livingston was declared Player Of The Match.