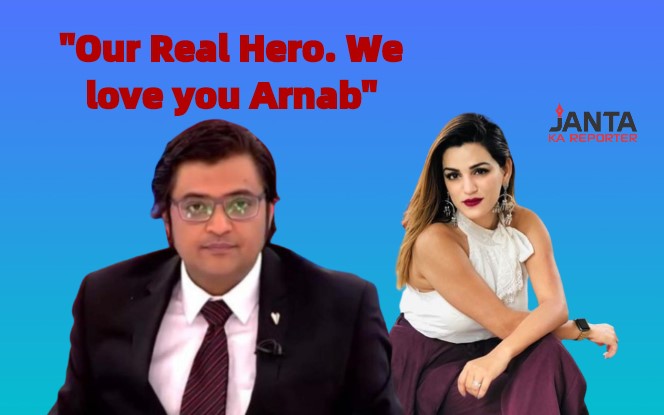 Shweta took to social media to write, “Our Real Hero. We love you Arnab.”

Goswami has been running a relentless campaign demanding a probe into the death of Sushant Singh Rajput, whose body was found from his house in Mumbai on 14 June. Whilst the authorities were quick to declare his death as an act of suicide, the actor’s fans have alleged foul play. Sushant’s father had filed an FIR with the Bihar Police accusing Rhea Chakraborty of abetment to suicide. He had also accused Rhea of transferring Rs 15 crore from Sushant’s bank account. This had prompted the Bihar government to recommend a CBI probe into Sushant’s death. Rhea had objected to the CBI probe questioning the jurisdiction of the Bihar Police since Sushant had died in Mumbai.

Rhea recently shared her WhatsApp conversation with Sushant to prove her innocence. In the conversations, shared by Rhea with India Today, the 34-year-old actor from Bihar had said that he believed his sister was manipulating his friend and roommate Siddharth Pithani.

Sushant, according to the WhatsApp message conversation shared by Rhea, had accused his sister of going against the teachings of their mother. He had allegedly said, “If you’re blinded by your ego, God bless you because I’m not afraid and I will continue doing what I’ve done till now in bringing out the necessary changes in the world. Let God and nature decide what ‘act’ is right now.”

The ED, which grilled Rhea’s brother Showik for 18 hours, has called the Jalebi actress once again for questioning. Both Rhea and her father Indrajit Chakraborty have been asked to appear before the agency today.

Arnab Goswami’s Republic TV had recently claimed that the body of Sushant’s former manager, Disha Salian, was found naked. Dusha had committed suicide days before Sushant ended his life. However, the Mumbai Police on Saturday rubbished the claims made by Republic TV.