Oscar-winning music director AR Rahman has stunned his fans by revealing that he too was a victim of a ‘gang in Bollywood’. His stunning revelation came amidst fans of Sushant Singh Rajput slamming nepotism and a coterie in Bollywood for his tragic suicide on 14 June. 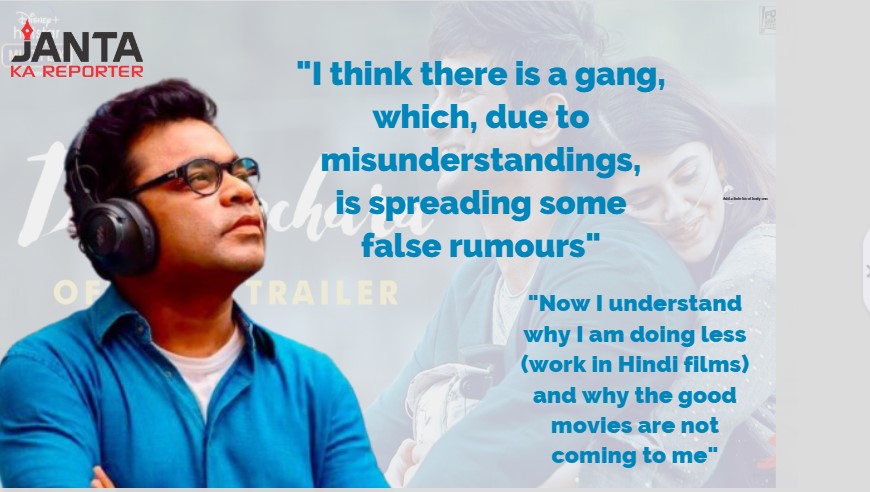 Rahman, who composed music for Sushant’s last film Dil Bechara, said that he learnt from filmmaker Mukesh Chhabra that a gang in Bollywood had been spreading false rumours to create misunderstandings about him. This, according to him, was the reason why he had stopped getting good films in Bollywood.

Sharing a personal anecdote during an interview with Radio Mirchi, the globally-renowned music maestro said, “I don’t say no to good movies, but I think there is a gang, which, due to misunderstandings, is spreading some false rumours. When Mukesh Chhabra came to me, I gave him four songs in two days. He told me, ‘Sir, how many people said don’t go, don’t go to him (AR Rahman) and they told me stories after stories.’ I heard that, and I realised, yeah okay, now I understand why I am doing less (work in Hindi films) and why the good movies are not coming to me. I am doing dark movies, because there is a whole gang working against me, without them knowing that they are doing harm.”

Chhabra has made a directorial debut with Dil Bechara, whose music has become a considerable hit with millions of views on YouTube. The film features Sushant Singh Rajput, Sanjana Sanghi and Saif Ali Khan in lead roles.

Rahman said that the gang of Bollywood did not affect him since he was a believer of destiny. He added, “People are expecting me to do stuff, but there is another gang of people preventing that from happening. It is fine, because I believe in destiny, and I believe that everything comes from God. So, I am taking my movies and doing my other stuff. But all of you are welcome to come to me. Make beautiful movies, and you are welcome to come to me.”

Later, responding to a tweet by filmmaker Shekhar Kapur, Rahman said, “Lost Money comes back, fame comes back, but the wasted prime time of our lives will never come back. Peace! Lets move on. We have greater things to do.”

Lost Money comes back, fame comes back, but the wasted prime time of our lives will never come back. Peace! Lets move on. We have greater things to do? https://t.co/7oWnS4ATvB