Badminton player and BJP member Saina Nehwal wasn’t the only prominent name to falsely claim that Prime Minister Narendra Modi was attacked during his trip to Punjab on Wednesday. Even actor Kangana Ranaut has taken to social media to repeat a similar claim as the pro-BJP actor called Punjab a ‘hub for terror activities. 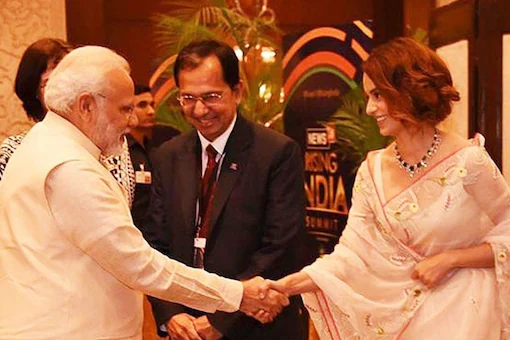 Kangana, who’s banned on Twitter for spreading hate speech, wrote on Instagram, “What happened in Punjab is shameful, Honourable Prime Minister is democratically elected leader/ representative/ voice of 1.4 billion people, an attack on him is an attack on every single Indian… it is an attack on our democracy itself, Punjab is becoming a hub for terroristic (sic) activities if we don’t stop them now, nation will have to pay a big price #bharatstandswithmodiji.”

Modi’s convoy was reportedly stuck at a flyover in Bhatinda as the Indian prime minister decided to reach Firozpur by road after canceling the scheduled helicopter ride to his rally venue. While BJP said that the protests by farmers had caused a security breach of the prime minister, Punjab Chief Minister Charanjit Singh Channi said that the real reason for Modi cancelling his rally was the empty chairs.

Also Read: “You have been wrongly briefed by the BJP IT Cell “: Saina Nehwal faces ridicule after wrongly claiming attack on PM Modi in Punjab

However, some of Modi’s ardent supporters have now invented extraordinary theory that the Indian prime minister was attacked in Punjab, prompting Kangana to call Punjab a ‘hub’ for terrorist activities.

Saina Nehwal had to face public ridicule after she made a similar claim, prompting many to conclude that these celebrities were simply amplying fake content of the BJP IT Cell. Saina in her tweet had written, “No nation can claim itself to be safe if the security of its own PM gets compromised. I condemn, in the strongest words possible, the cowardly attack on PM Modi by anarchists. #BharatStandsWithModi #PMModi.”