Mukesh Ambani’s wife Nita Ambani arrived for the first day of this year’s IPL auction with her son Akash Ambani even though Isha Ambani, Shloka Mehta and Anat Ambani stayed away from the proceedings. Nita dominated the social media conversations all through Saturday after her team Mumbai Indians paid a whopping Rs. 15.25 crore for Ishan’s Kishan return to the team. But, as the day’s proceedings progressed, India’s richest businessman’s wife received an unexpected compliment from Mumbai Kings’ owner Preity Zinta, who simply could not resist her temptation to praise Nita Ambani’s ‘beautiful eyes.’ Preity, who had decided to stay from this year’s IPL auction, also showered praises on Mumbai Indians’ bidding team for being ‘covid compliant.’ 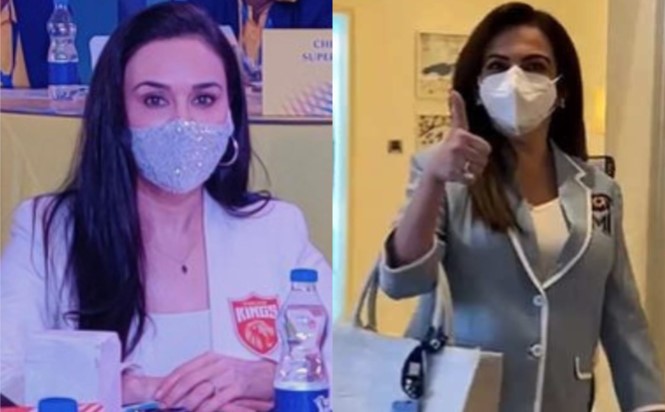 Preity’s fans did not agree with her as some said that the actor had prettier eyes than Nita Ambani. “Not prettier than you. You are flawless beauty,” commented one fan. Another commented, “She has beautiful eyes but you have beautiful dimples.” Another fan wrote, “Missed you Preity in today’s auction. Hope u will be present to cheer Punjab kings team at pune and Mumbai stadium.”

Explaining her reasons for not being able to attend this year’s IPL auction, Preity had said on Instagram, “This year I’m going to miss the IPL Auction as I cannot leave my little ones and travel to India.”

She had added, “The last couple of days have been hectic discussing the auction and all things cricket with our team. I wanted to reach out to our fans and ask them if they have any player suggestions or recommendations for our new team. I would love to know who you wanna see in the red jersey this year. Bring it on folks… I’m all ears.”

Yesterday’s IPL proceedings had to be stopped after the auctioneer collapsed during a bidding war for a Sri Lankan player. Nita Ambani was seen calling for medical help after Hugh Edmeades feel on the floor and remained motionless for a long time. His condition was later described to be stable. A statement from the IPL had said, “Mr. Hugh Edmeades, the IPL Auctioneer, had an unfortunate fall due to Postural Hypotension during the IPL Auction this afternoon. The medical team attended to him immediately after the incident & he is stable. Mr. Charu Sharma will continue with the Auction proceedings today.”