Union Minister Kiren Rijiju has found himself in a spot of bother on social media after he was seen facilitating a Bollywood star plan her tour to Arunachal Pradesh on a day when four more security personnel died in an encounter with militants in Jammu and Kashmir. 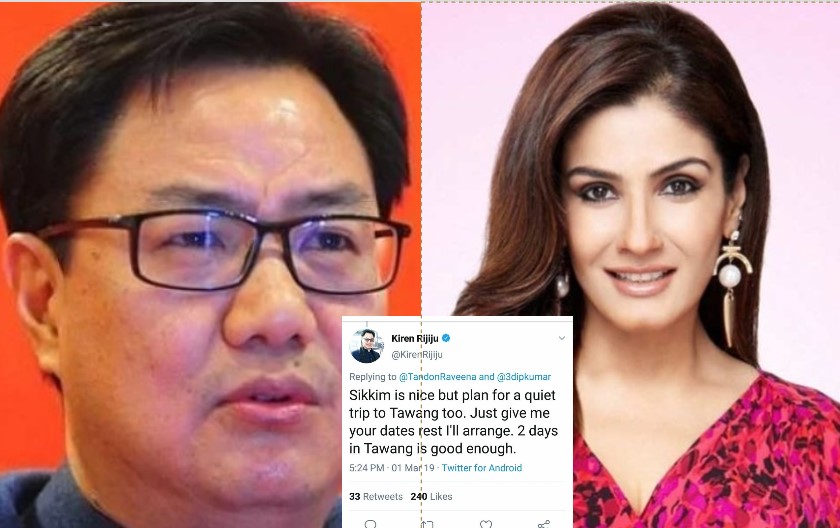 This was after Bollywood actress Raveena Tandon on Friday took to Twitter to request Rijiju, who comes from Arunachal Pradesh, to improve the connectivity of the north-east states with the rest of India. Reacting to a comment made by Rijiju on the India Today Conclave on Friday, Raveena had written, “In the same breath sir,pls promise to improve connectivity by air,rail,roads to the northeast. @KirenRijiju our Northeast is not only beautiful but stunningly enriched with culture,natural beauty, just don’t over commercialise it after it’s opened up.Let the natural beauty remain.”

When one user said that this the first time a Bollywood celebrity was talking about the north-east, the minister came in her defence and wrote, “I agree but @TandonRaveena is always sensitive to the social issues and has been raising her voice for socio-economic and developmental issues regularly.”

Raveena replied, “I wanted to visit Gangtok with my husband for a weekend getaway, but unfortunately irregular flights and cancellations, change out itenary, looking forward to visit soon again.”

This prompted the Minister of State for Home Affairs, incharge of internal security, to post the controversial tweet (now deleted). He wrote, “Sikkim is nice but plan for a quiet trip to Tawang too. Just give me your dates rest I’ll arrange. 2 days in Tawang is good enough. 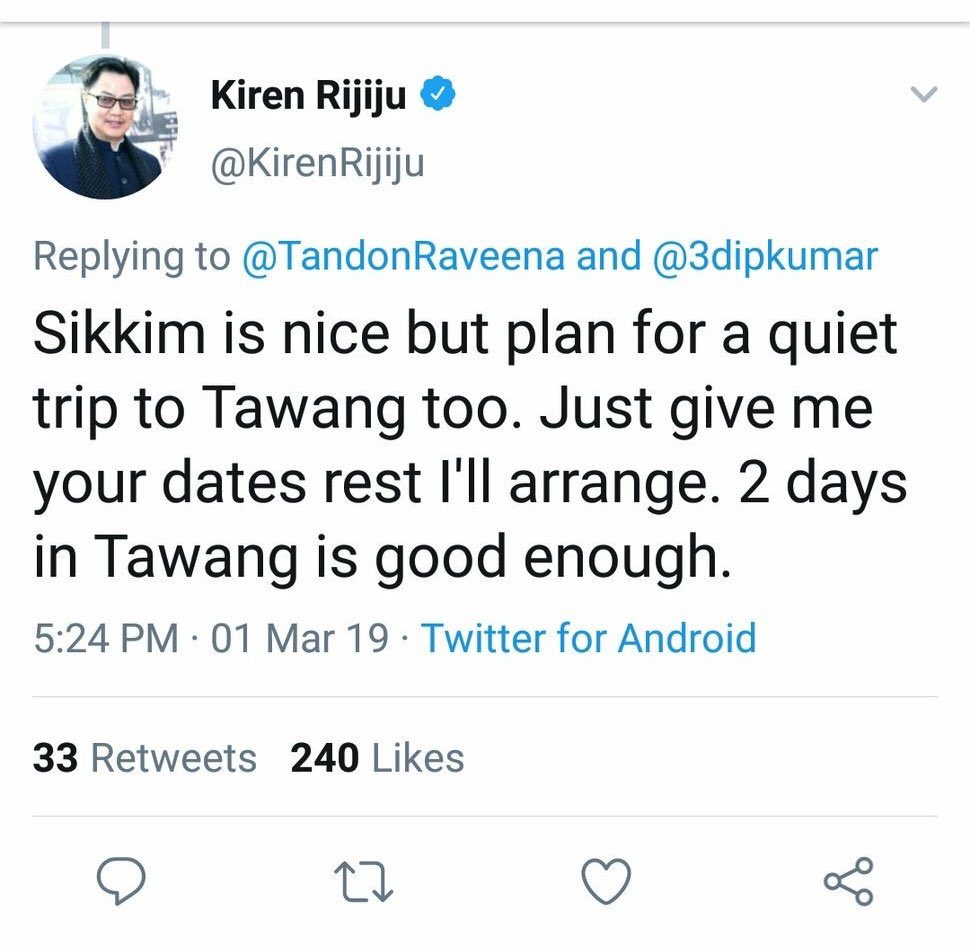 This tweet by Rijiju evoked angry reactions on social media as many deemed it utterly insensitive since this had come even when media outlets including Janta Ka Reporter reported the loss of four security personnel’s lives in Jammu and Kashmir’s Kupwara on Friday. The same day, Indians were also holding their breath for the safe return of its hero, Wing Commander Abhinandan Varthaman, from Pakistan.

While the entire nation was waiting anxiously for safe return of our braveheart #Abhinandan, Union Minister Kiren Rijiju was playing the role of a travel agent for Raveena Tandon.

BJP is least concerned about our soldiers, they just use them for electoral gains. (Tweet deleted). pic.twitter.com/hkfKVYBBnI

On a day when 5 jawans including a CRPF officer were killed in an encounter with militants on Friday in Kupwara district of J&K while a civilian died in clashes near the site, our Minister of State for Home @KirenRijiju is busy for arranging a holiday package to film personality pic.twitter.com/I8G8jGv7SK

Faced with growing outrage and allegations of insensitivity towards the fallen soldiers, Rijiju deleted his controversial tweet and replaced it with a new reply. It read, “Actually every part of #NortheastIndia is beautiful. You can visit Arunachal Pradesh or any State at any point of time.”

Rijiju was also left in an awkward position by his party spokesperson Sambit Patra on Friday because of some dubious claims made by the latter on the recent Indian strikes inside Pakistan.

On Friday, four Indian security personnel including a CRPF officer were killed during an encounter with the militants in Jammu and Kashmir Kupwara’s district.