Johnny Depp’s lawyer Camille Vasquez has become a global celebrity after she won the Hollywood actor’s recent libel case against Amber Hard. Now, she has earned a huge reward from her employer, who took to social media to announce her promotion. 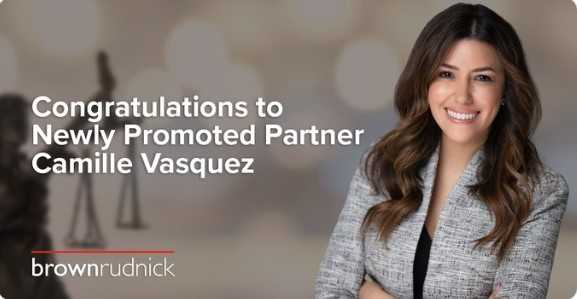 Camille’s law firm Brown Rudnick said that the lawyer had now been promoted to become the company’s partner.

William Baldiga, chairman and CEO of Brown Rudnick, said, “We are delighted to welcome Camille to the partnership.”

He added, “Historically, we have reserved this announcement for the end of our fiscal year. But Camille’s performance during the Johnny Depp trial proved to the world that she was ready to take this next step now. We are incredibly proud of her and look forward to what she will accomplish as our newest partner.”

Reacting to the news, Camille said, “I am delighted that Brown Rudnick has given me its full vote of confidence by having me join the partnership. I’m proud of the uniquely talented team I’ve had the privilege to lead, which exemplified teamwork and collaboration, and I look forward to continuing to represent Brown Rudnick’s culture of excellence.”

After Johnny Depp won his libel case against ex-wife Heard, Camille had become a top trend on the internet globally. A petition was launched asking the makers of Aquaman 2 to replace Hard with the young lawyer for the Mera character.