Jharkhand Chief Minister Hemant Soren on Thursday night launched a stunning attack against Prime Minister Narendra Modi for his phone call to him which he described as a one-way conversation. Soren said that Modi did not care to listen to the former’s point of view on the pandemic. The stunning social media post by the Jharkhand CM made him a top trend on Twitter, evoking angry reactions as Times Now’s Navika Kumar and News18 India’s Amish Devgan, often mocked as poor man’s Arnab Goswami, came to PM Modi’s rescue. 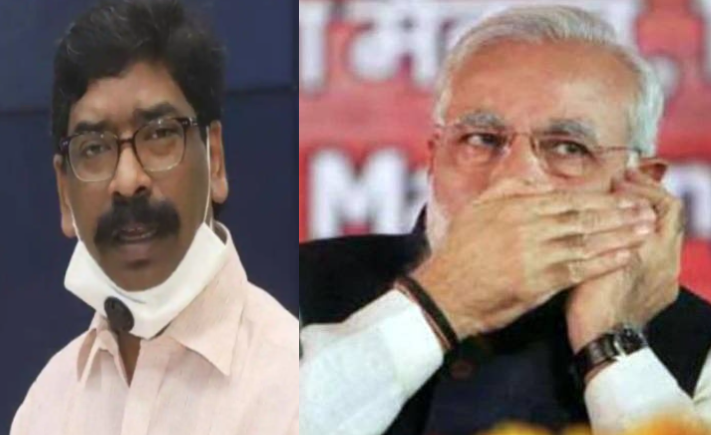 Soren’s stunning attack against the prime minister made him a top trend on the microblogging site with many praising him for taking on the country’s most powerful man. User Amit Mishra agreed with Soren as he took a potshot at PM Modi’s priority for the Central Vista project worth Rs. 20,000 crore even in the raging pandemic. He wrote, “Why would a prime minister care to listen to others’ plight when he’s more obsessed with renovation his own house worth Rs. 20,000 crore than ensuring vaccination for all?” User Shweta tweeted with laughing emojis, “To hell with the protocol.”

However, anchors from India’s TV channels immediately took to Twitter in defence of PM Modi. Times Now’s Navika Kumar wrote angrily, “Has it really come to this now? In a pandemic when PM @narendramodi calls up a CM to enquire about the COVID situation in the state this is what a CM says? Is propriety dead? Is respect/courtesy extinct? Petty posturing more imp than human lives? PM abused for helping? Shocking”

Earlier, Modi had lost his cool after Delhi Chief Minister Arvind Kejriwal had broadcast his speech from the PM’s video conference with chief ministers. Modi had said that Kejriwal’s action was in violation of the established protocol. Kejriwal immediately apologised and pledged never to repeat it again.