Jasprit Bumrah wreaked havoc on Thursday as Mumbai Indians defeated Delhi Capitals by 57 runs to reach the IPL final for the sixth time. Bumrah bowled a devastating spell to claim four wickets by conceding just 14 runs in four overs. This was his best bowling spell in the IPL. 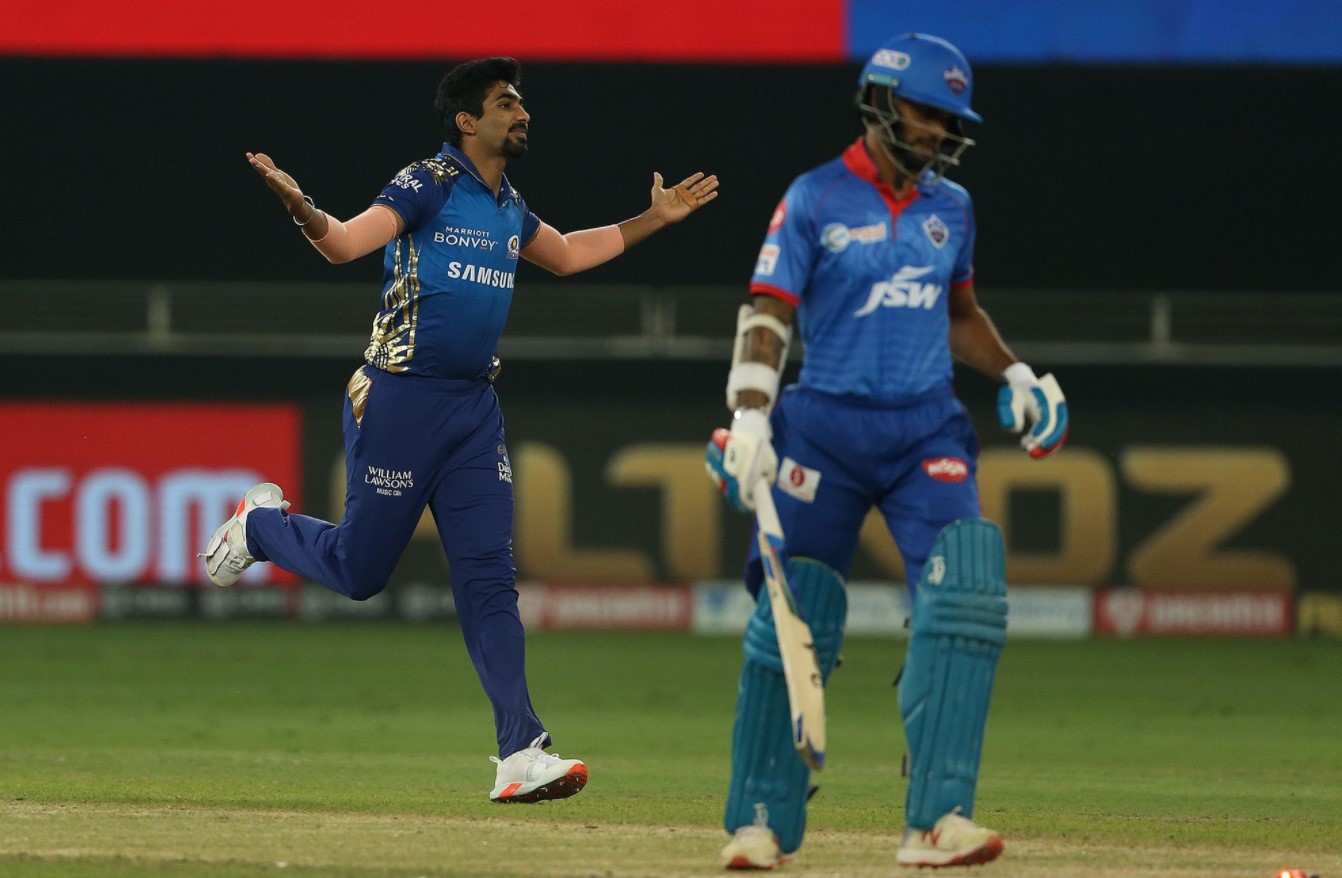 Batting first, Mumbai Indians piled up a total of 200-5 in 20 overs with Ishan Kishan remaining NOT OUT at 55 in 30 balls as the team’s highest-scorer. Suryakumar Yadav too made 51 in 38 balls before getting out off Anrich Nortje’s bowling. Quinton de Kock was the first to set the mood for Mumbai Indians as he scored a quickfire 40 in 25 balls. Just when Mumbai Indians found themselves at the receiving after losing Yadav and Kieron Pollard in quick succession in the 12th over, Hardik Pandya upped the ante by scoring a 14-ball 37 run knock, which included five sixes.

Ravichandran Ashwin was the most successful bowler for Delhi Capitals as he finished with a figure of 3-29 in four overs.

The run-chase by Delhi Capitals started on a disastrous note as they lost their first three wickets for zero. Top three batsmen returning to dressing room without bothering the scorer were Prithvi Shaw, Ajinkya Rahane and Shikhar Dhawan. The 0-3 score after 1.2 overs became 41-5 in 7.5 overs. Since then, they simply could not recover as the required run-rate kept spiralling out of control. Marcus Stoinis fought a lone battle as he completed a well-deserved fifty, but this was not enough to chase the target of 201. He was bowled out by Bumrah for 65 that he took 45 balls to score.

With today’s win, the four-time champions have reached another IPL final. Delhi Capitals will have to try their luck against the winners of the eliminator match between Royal Challengers Bangalore and Sunrisers Hyderabad. If Delhi Capitals manage to beat the winners of the eliminator match, the IPL final would once again be the repeat of tonight’s match.

Reacting to his side’s defeat, Shreyas Iyer said, “Very tough. I don’t want to talk anything negative about the side, but going forward we have to make sure we come out with a solid mindset. We were on top of the game especially in that phase when we got two wickets, and they were 110 for in 13 or 14 overs. That is when we should have capitalised more. We could have chased 170 on this wicket. It is part and parcel of the game. Every night can’t be yours. We just talk about the opportunities we have. It is not easy to be in the bubble and follow the same routine every day. The practice we have put in, the hard work, it is really tremendous. Ashwin was brilliant. He is always there, offering something for the team. He plays with the batsmen’s minds. Great to have his inputs as a captain. All the batsmen in their team are in great touch, especially when Hardik and Pollard come down the order, and their top-order batsmen have full freedom and are in great form. So it is not easy to control them.”

Rohit Sharma, for his part, said, “I guess this was our best so far. The way we came out with the intent. The way de Kock and Surya batted after we lost a wicket in the second over, the way we closed out, and then the clinical bowling. We never had any target in mind because we are a different team, and we want to play in a different. We wanted to play as it comes. We wanted to start well. Losing my wicket in the second over was great, but then de Kock and Surya turned the momentum towards us. In T20 we always talk about momentum. We never want the momentum to shift towards the opposition. Ishan has been in great form so we wanted him to be positive. So the message was clear to him in the timeout. Please don’t be afraid to put the pressure back. Back your instinct. Having such a versatile squad it gives me the luxury to change the batting order and rotate the bowlers. I have not seen Trent yet but he looks okay. It is a big game coming up but we just wanted him to be okay for the next game. He looks okay. I am sure he will be on the park on the 10th. When you have bowlers like Bumrah, it makes your life easy. And Bumrah and Boult are in top form. When they play for different countries and franchises, they have different plans. Hats off to them for buying into our plans and executing them so well.”

Bumrah was declared Man Of The Match for his impressive bowling.