The exclusive newsbreak by The Times on British Prime Minister Boris Johnson attempting to give then-mistress Carrie Symonds a £100,000 role in Foreign Office during his time as the Foreign Secretary has become even more controversial. What has made the controversy more spooky is the decision by The Times to remove its own exclusive newsbreak allegedly at the behest of intervention from 10 Downing Street. 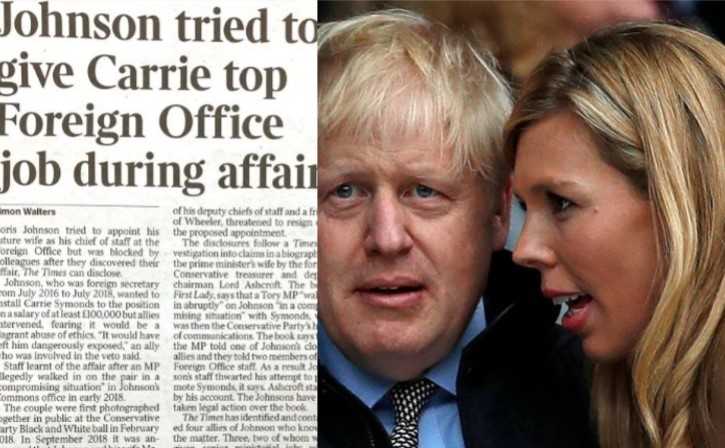 According to the exclusive story broken by The Times, Johnson wanted to give his then-mistress and now-wife, Carrie Symonds, a top job in his own department for a whopping annual salary of £100,000. The move was thwarted after Johnson’s own advisers saw a breach in ethical standards after they learned about his illicit affair with Symonds. Johnson was still married to Marina Wheeler, his second wife of 25 years and mother to four of his children.

The story was first offered to Daily Mail, but the newspaper reportedly declined to carry it. According to The New European website, Dail Mail said that the story did not conform with the newspaper’s ‘general point of view.’

The tipster then approached The Times, which put its journalist Simon Walters on the story. Walters was able to find at least four allies of Johnson with all of them reportedly confirming the story.

Johnson was on a surprise visit to Ukraine when he was informed about the story. He immediately put his staff on the case and the story vanished from the subsequent editions of The Times, which chose not to publish it online. Daily Mail, which had carried a story quoting The Times, too removed the story. US-based MSN.com, which too had run the story on its website, too took down the story later.

Walters has, however, defended his story, which featured prominently in this week’s PMQ. MP Chris Elmore asked Johnson, “Has he ever considered the appointment of his current spouse to a government post or to any organisation in the working of the royal households? Be honest, prime minister, yes or no?”

Johnson did not deny the allegation as he said, “I know why the party opposite wants to talk about nonexistent jobs, in the media. Because they don’t want to talk about what is going on in the real world.”

Also taking a dig at Johnson was Labour leader Sir Keir Starmer told Johnson mockingly, “I’m surprised he’s giving me advice about my team. If I do need advice – let’s say about a £100,000 a year job at the Foreign Office – I will ask him for a recommendation.” This was after Johnson highlighted how some Labour MPs had visited the rail strike picket lines in solidarity.

Why Is Story So Juicy?

The reported development took place in early 2018 when Johnson was the Foreign Secretary under Prime Minister Theresa May. He was still married to his second wife Wheeler, a lawyer and the mother of his four children. Johnson’s party colleagues learned about his illicit relationship with Symonds after an MP reportedly found him in a comprising position with his mistress in his office.

Johnson split with Wheeler in September 2018.

Social media users have reacted in shock after learning that Times, Mail Online and MSN have taken down the story.

The stuff of corrupt dictatorships not the mother of Parliaments#PMQs pic.twitter.com/VxUiE1Ed7U

Apparently Boris Johnson and Carrie Johnson don’t want you to know about a certain news story that briefly appeared and then vanished online. It must really annoy them each time each crops up on social media. Which story? This one. pic.twitter.com/toUZQzXqab

So basically, No 10 put pressure on the Times to drop a story that would otherwise have been in the public’s, but not Johnson’s @BorisJohnson interest. Sure there must be a word for this. https://t.co/1MCztlwGd2

Johnson, who win a landslide in 2019 to become prime minister, was the foreign secretary between 2016 and 2018. He later resigned in protest at then Prime Minister Theresa May’s Brexit position.