The discovery of Rs. 19 crore cash from a chartered accountant linked to IAS officer Pooja Singhal during the recent ED raids has left netizens shocked. What has further baffled many is the revelation that Singhal’s husband was able to set up a 5-star super speciality hospital in Ranchi amidst the soaring clout of his civil servant wife in Jharkhand. Ranchi is the state capital of Jharkhand. As expected, the shocking revelations about a civil servant and the unexplained growth in her wealth and stature have prompted many to wonder if this is what excites India’s young minds to aspire to become IAS officers. 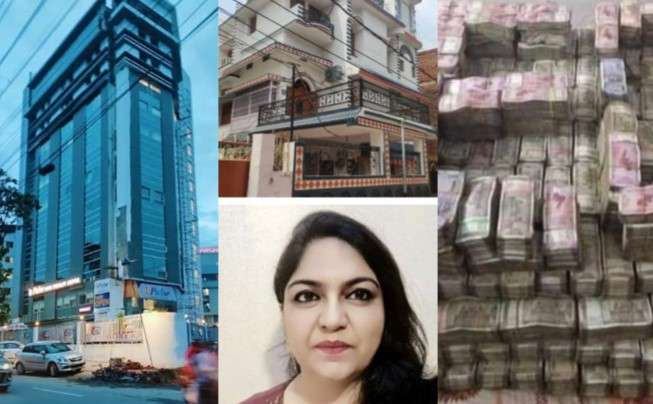 The ED last week carried out raids on multiple premises in four states, all linked to Singhal. These states were Jharkhand, Bihar, West Bengal and Punjab. The financial probe agency of India discovered in excess of Rs. 19 crore cash from the possession of Singhal’s CA, identified as Suman Kumar.

As reported by Janta Ka Reporter earlier, Pooja is a 2000-batch IAS officer and has served in both in Congress and BJP governments. In her 22 years of service, Pooja has held several important posts including Deputy Commissioners of districts such as Palamu, Kunti and Chatra before she was promoted to secretary-level posts.

Pooja was the agriculture secretary in the previous BJP government and now holds the mining secretary’s role in the current government headed by Hemant Soren. It’s not surprising that Hemant Soren too finds himself in a state of bother over allegations of allotting a mining lease in his favour and an expensive plot of land to his wife.

The rise in Pooja stature in Jharkhand is not surprising since any IAS officer with 22 years of experience is expected to wield considerable clout in the government. But, it’s the ease with which she has managed to please governments of various political parties that has surprised everyone.

As expected Pooja has become the topic of intense social media conversations with many wondering if the greed for money is what encourages young aspirants to slog for the UPSC exam.

Just to let you know, her husband in the recent years has established a full fledged hospital and a diagnostic centre in Ranchi pic.twitter.com/HGZEZWLWpR

Meanwhile UPSC aspirants to Pooja Singhal be like:- pic.twitter.com/Mvs33mi1JP

More than 17 crore cash found from the house of CA or jharkhand's IAS Pooja Singhal.
The real traitors of the country are corrupt leaders and officials. Why is a case treason not registered against them?#PoojaSinghal pic.twitter.com/4J2yo5a0Bh

All IAS officers should be asked to disclose their income, tax and assets.

There is much talk about how can IAS officer Pooja Singhal have 20 crores of Cash & so many properties in different Metro Cities! Well, if ED starts Raiding properties of IAS & IPS officers all across the country very Few will turn out to be Honest. Rest are all Super Corrupt. pic.twitter.com/lVuBo9pXEw

A bright young IAS officer in Jharkhand Pooja Singhal caught with Rs 20 crore cash in ED raid. Now we know why even IIT graduates and doctors aspire to become IAS and IPS officers