Arnab Goswami’s claims in alleged leaked WhatsApp chat has reportedly left the BJP ministers in the Narendra Modi government nervous, forcing them to maintain a safe distance from the controversial anchor. This came just weeks after several top BJP leaders took to social media to extend extraordinary support to the Republic TV founder immediately after his arrest in the abetment to suicide case on 4 November. 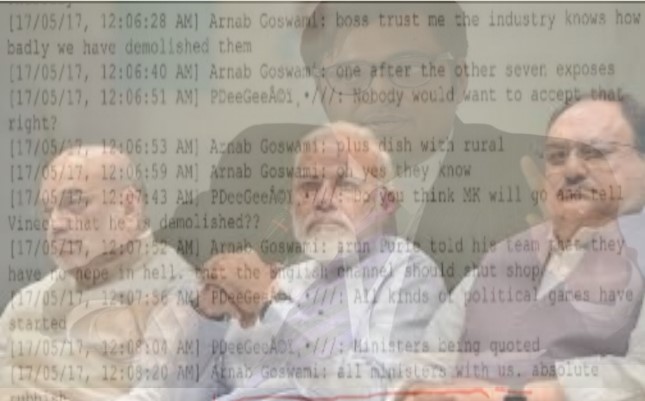 This was after Arnab claimed to enjoy the support of ‘all ministers’ in the Narendra Modi government. In the alleged leaked WhatsApp chat dated 17 May 2017, Goswami had boasted, “Arun Purie (India Today owner) told his team that they have no hope in hell. that the English channel should shut shop.” Goswami’s chat partner, Partho Dasgupta, the then CEO of BARC, had replied,”All kinds of political games have started. Ministers being quoted.”

Goswami had sensationally replied, “All ministers with us. absolute rubbish.”

A report by Indian Express has said that at least six BJP leaders ‘including a Union Minister, admitted that the controversy had put them in a spot.’ BJP ministers also appear to be hurt by revelations that Goswami had referred to them in a not-so-flattering manner in his WhatsApp chat with Dasgupta.  Goswami’s chat had said ‘Jaitley stretching it’  when the former union minister was battling for life. He had also called I&B Minister Prakash Javdekar ‘useless.’

Former Union Minister Jaitley died in Delhi on 24 August last year, two years after undergoing a kidney transplant. However, in a chat dated 19 August, Goswami had told Dasgupta in exasperation, “Jaitley stretching it.” His subsequent message had read, “PMO doesn’t know what to do. PM leaving on Wednesday for France.”

The Congress has demanded a thorough probe into the WhatsApp chat controversy on the grounds that the government had compromised national security by tipping Goswami off about the Balakot airstrikes.

Congress leader and former Union Minister Salman Khurshid had said that the revelation about Jairley was deeply painful. He had told reporters in Delhi, “The kind of conversations that have come about him is deeply deeply saddening, very hurtful. He was on his death bed and all his supporters, all his friends and all his contemporaries were very saddened that he left his life so early. And yet, here’s a cynical, hardened mind talking about ‘why doesn’t he die quickly? What is it that they say the government is maintaining him?’ In other words, why are efforts being made to keep him alive when the prime minister has to travel abroad?”

The Modi government’s ministers’ reluctance to speak on Arnab Goswami’s chat controversy is in sharp contrast to how they reacted in his support when the controversial anchor was arrested in November. Home Minister Amit Shah, BJP President JP Nadda, Finance Minister Nirmala Sitharaman, External Affairs Minister S Jaishankar, Railway Minister Piyush Goyal, Information and Broadcasting Minister Prakash Javadekar were among top BJP leaders, who had come out in the open to support of Goswami.

Shah had termed his arrest a ‘misuse of state power,’ while Nadda had said that ‘bullying and harassment’ of Goswami was a ‘shameful’ act.

BJP ministers appear to be nervous that their much-touted claims on nationalism may take a beating if the controversy over Goswami’s WhatsApp chat scandal prolongs any further. There’s also an immediate danger to the reputation of PM Modi, who is finding himself in a spot of bother for allegedly sharing sensitive information on the Balakot airstrikes with a TV anchor. In an extraordinary press conference a few days ago, Congress MP Rahul Gandhi had said, “I want to know whether it was the prime minister of India, who told Arnab Goswami or it was the defence minister or the home minister or the NSA. I want to know which one of those people told this man.”

Gandhi had gone to the extent of alleging that Pakistan too may have been aware of India’s military operations in February 2019 if Goswami knew about it three days before the Indian Air Force carried out the military exercise deep inside the neighbouring country.

Goswami’s chat hints at corruption worth crores of rupees, the complicity of union ministers in allegedly helping one TV channel owner over his rivals and alleged comprise of national security. All these allegations are far more sinister in nature and outrightly criminal if proven in a court of law. Clearly, the Modi government’s ministers are not prepared to risk their political future for one TV anchor, who may be easily dispensable.