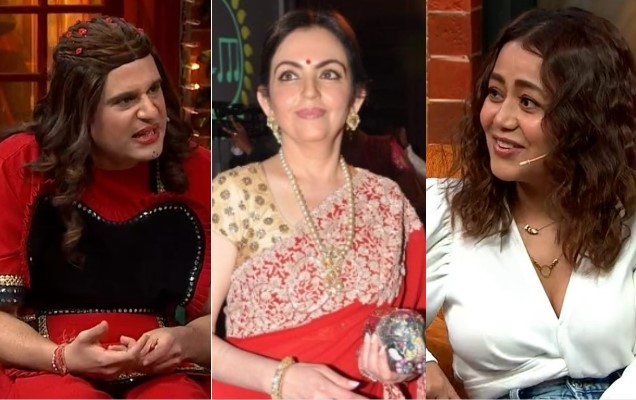 Krushna said that had ‘also gone to the Ambani house’ in preparation of Neha Kakkar’s wedding hoping to get an invite from the Indian Idol judge. When Kapil Sharma asked for the reason for his visit to Shloka Mehta’s in-laws’ house, Krushna said, “To get my phone recharged.” This left everyone including Archana Puran Singh in splits.

But Krushna wasn’t done yet as he continued, “The (Reliance Jio) shop was closed so I thought I would go there (to Ambani house).” Krushna also claimed that he enjoyed ‘close relations’ with the affable mother of Akash and Isha Ambani. A visibly surprised Neha said, “Really?” Krushna replied, “Yes, whenever she sees me, she closes the gates.”

Once again, everyone was in splits hearing Krushna’s jokes. Neha too decided to leave Krushna red-faced as she pointed out how Krushna had forgotten to get parts of her body waxed. She said innocently, “You got everything including mehndi done, but forgot the waxing part. I can see some hair on your hand.” Krushna replied, “You are talking about my hand, if I do make-up (to play a woman’s character) in the morning, my beard grows by the evening.”

This was the first time Neha Kakkar and Rohanpreet Singh were appearing on a TV show since tying the knot in October this year. Neha has also started judging the singing reality show, Indian Idol.

On Saturday, Krushna had taken a dig at his uncle Govinda amidst a full-blown controversy over their broken relationship in the recent months. The famous actor-comedian and explained for the first time why he had chosen to boycott The Kapil Sharma Show featuring his uncle recently. A visibly stunned Archana Puran Singh had breathed a sigh of relief after Krushna responded to Kapil Sharma’s provocation to take an extraordinary dig at uncle Govinda.