Arnab Goswami’s show on Republic TV on Thursday faced another bout of drama as one of his guests taking part in his prime time show decided to walk out of the programme since he was being accused of faking claims. Goswami was debating the political fallout of the raging agitation launched by doctors in West Bengal against the Trinamool Congress government. 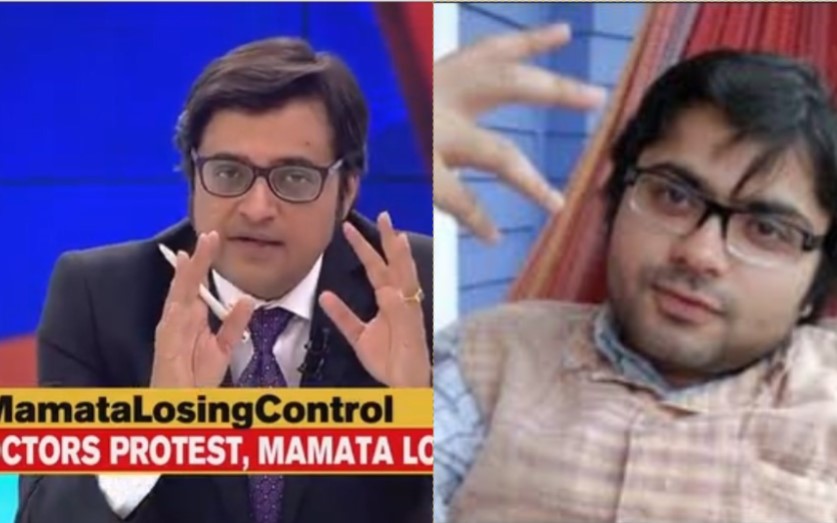 He was joined by doctors, a Trinamool Congress representative and BJP supporters among others on his show.

One doctor participating in the debate said, “We don’t support the BJP, neither are we against it. We want peaceful resolution to the agitation. Let vandalism stop. I sympathise with junior doctors. I myself was a junior doctor 20 years ago. Their confidence is shattered.” It was at this point when Goswami shouted aloud addressing the Trinamool spokesperson Garga Chatterjee, “Hear this Garga… Hear that, hear that. Let Garga hear that.”

While Goswami made his intervention asking Chatterjee to listen to the point being raised by the doctor in the panel, Chatterjee began to point at the audio problem in his earpiece implying that he was not able to hear the audio from the studio since he had joined the debate from his house in Kolkata.

But, Goswami insisted that Chatterjee was faking the audio problem when there was none. He said, “Garga, you can hear loud and clear.” The Trinamool representative replied, “I’m not getting the sound, what the hell. Why are you doing this?”

Goswami said, “Your audio is absolutely clear. You are faking it. You have been caught red-handed because you have no response.” Chatterjee insisted that he wasn’t lying as he addressed the Republic TV cameraman present inside his house to come in front of the camera and confirm that there were indeed audio issues.

Goswami appeared in no mood to buy into Chatterjee’s claims of experiencing trouble in the audio link. He said, “You’ve been caught red-handed, otherwise how did you hear me when I uttered your name.” Chatterjee asked Goswami to seek confirmation from his cameraman. Both Goswami and Chatterjee remained engaged in an intense argument for several minutes. It appeared that while Chatterjee was able to hear Goswami, he could not get the clear audio of other guests particularly the doctor on the programme.

Goswami said, ‘Sit down and stop your drama Garga.” This prompted Chatterjee to remove his earpiece and walk out of the show. Goswami said, “He’s walked out because he cannot answer.”

Hours later, Chatterjee took to Twitter to clarify, “Tonight I was on a show in @republic. From start, I was getting very low audio when it came to audio feed from location of Kolkata doctors. I said so. Minutes later host Arnab Goswami claimed I was pretending not to hear. I chose not to continue with such theatre & left the show.”

Tonight I was on a show in @republic. From start, I was getting very low audio when it came to audio feed from location of Kolkata doctors. I said so. Minutes later host Arnab Goswami claimed I was pretending not to hear. I chose not to continue with such theatre & left the show.

Chatterjee’s Twitter bio says that he’s a ‘brain scientist’ adding that he was also a ‘Bengali Nationalist,’ who holds a PhD degree from the Harvard University.